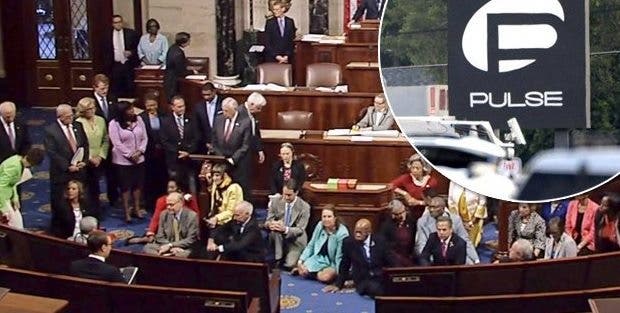 Infuriated by the perpetual refusal of our Republican legislators to pass any kind of meaningful, common-sense gun reform, over seventy House Democrats are staging a sit-in in protest, led by civil rights icon John Lewis (D-GA). Barely two weeks after a gunman murdered fifty people in an Orlando nightclub, Senate Republicans killed four gun reform bills – including one that would prevent people on terror watch lists from purchasing firearms, showing once again that the Republican Party is beholden to the National Rifle Association and have forsaken their oaths to the constituents they ostensibly represent.

The cowardly sellvotes in the Republican House have turned off the C-SPAN cameras in an effort to muffle the protests of the men and women who truly fight for the American people, but this is of course the age of the internet, and that will not be enough to silence them.

This protest is ongoing and this post will be updated as events unfold. We couldn’t be more proud of our elected Democratic representatives standing up against the do-nothing blood profiteers of the Republican Party and their arms-dealing masters.

C-SPAN has no control over the U.S. House TV cameras.

I’m on the House floor with @repjohnlewis & Dems staging a sit-in to demand action on commonsense gun legislation pic.twitter.com/byIivby5gG

Add your name to call on prosecutors to ARREST DONALD TRUMP for his crimes!Advertisements
Tags
gun control house democrats style