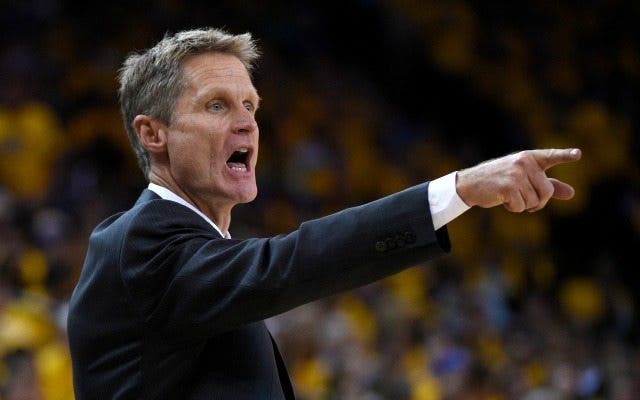 The NBA’s top coach thinks that our government is insane to “make it easier to buy a gun than get a driver’s license.” The Golden State Warriors head coach Steve Kerr spoke out in a podcast about the need for reasonable gun laws in America, not just as sports star but as someone who personally lost a loved one to gun violence – his father, Malcolm.  From the USA Today’s transcript:

“I kind of think that our forefathers would not have OK’d automatic weapons to be sold to everybody if they existed back then. Let’s have some checks. It’s easier to get a gun than it is to get a driver’s license. It’s insane. And as somebody who’s had a family member shot and killed, it devastates me every time I read about this stuff — like what happened in Orlando — and then it’s even more devastating to see the government just cowing to the NRA and going to this totally outdated Bill Of Rights, right to bear arms. If you want to own a musket, fine, you know, but come on. The rest of the world thinks we’re insane. We are insane.

The 6-time NBA champion Kerr wasn’t going to stop there. His points about the nature of gun ownership in 1776 when a single shot rifle was the height of technology are top of mind for the many people in America who want to see reasonable controls to keep people from buying an AR-15 weapon in less time than it takes to go grocery shopping.

“I just have to get this off my chest. Our government is insane. We are insane. And what bugs me is this adherence to the right to bear arms, you know. That was back in 1776. People didn’t own automatic rifles. You had to have a musket in case the Redcoats were coming, the British were coming. And the beautiful thing about the Constitution is they left open amendments to change things because things change over time.

NBA coaches have had to consider the danger of guns in professional basketball more closely since Washington Wizards guard Gilbert Arenas used a firearm to threaten one of his own teammates inside the club’s locker room.  Kerr ended his rant by accurately explaining how broadly Americans want better gun control laws, and what to do if we don’t get them passed soon.

“When 90 percent of our country wants background checks on gun purchases and we’ve got our senate and our house not only voting it down but using the Bill of Rights as a reason for people to have rights to carry these automatic weapons, and we’re getting people murdered every day at an alarming rate.”

“And until we vote these senators and congressmen and -women out of office, the same thing’s gonna happen.

We’re sure Steve Kerr is talking about Republican senators and congressmen, because Democrats just spent the whole week in the Senate filibustering, voting for gun control and sitting-in the House of Representatives to demand votes and action on new American gun control laws. Hopefully, the Golden State Warriors fans heed Coach Kerr’s call to action and vote out the cowardly Republican lawmakers who refuse to keep dangerous weapons out of the hands of the most dangerous criminal suspects in America today.