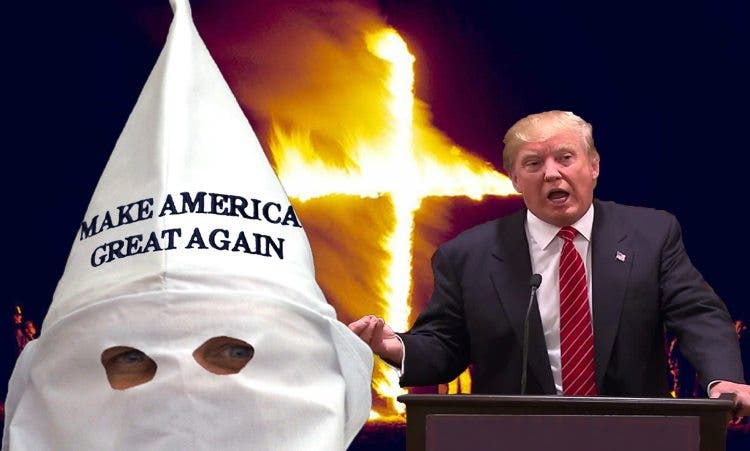 It’s hard to fully comprehend, but in this day and age, America’s most notorious white supremacy group, the Ku Klux Klan, is having a renaissance. A new report by the Associated Press details how one of the blackest stains on American history is still alive and thriving. Adapting and rebranding themselves for the modern era, the omnipresent terrorists are resurging with the rise of Donald Trump to the Republican presidential nominee, focusing on a more publicly palatable anti-immigration message rather than the fringe calls for genocide. “You know, we began 40 years ago saying we need to build a wall,” said Thomas Robb, leader of the Arkansas Knights of the Ku Klux Klan.

Robb’s chapter is one of the many Klan groups seeking to reclaim the influence they once wielded, renaming themselves the Knights Party USA. One hundred and fifty years later, Southern nights are still illuminated by burning crosses and swastikas, but this time on private property, away from the public eye. Membership flourishes as anti-immigrant and anti-Muslim sentiment grows and Klan leaders are emboldened by a growing conviction “that U.S. politics are going their way, as a nationalist, us-against-them mentality deepens across the nation.”

Their new approach includes embracing the internet and the operational reach it offers, allowing members to join and purchase their trademark hoods online. They are reportedly turning to a new emphasis on toning down the horrific violence of the Civil Rights era to try to appear to the mainstream public instead of just the social dregs of disaffected racists, and in response to new federal hate crime laws that put perpetrators in jail years after their crimes were committed.

“While today’s Klan has still been involved in atrocities, there is no way it is as violent as the Klan of the ’60s. That does not mean it is some benign group that does not engage in political violence,” said Mark Potok of the Southern Poverty Law Center. Klan groups have been working to unify into a larger movement, but are still deeply divided over issues like acceptable levels of violence and whether or not to associate with neo-Nazi groups.

William Daniel Johnson, chairman of the unabashed white supremacy group the American Freedom Party, crowed that “Donald Trump is the real deal. This is a unique phenomenon in modern politics. It is a throwback to a previous era. Virtually all pro-white nationalists are at least somewhat supportive of Donald Trump and most are even enthusiastic. He’s made it ok to talk about these incredible concerns of European Americans today, because I think European Americans know they are the only group that can’t defend their own essential interests and their point of view. He espouses is the closest thing to white nationalism that we have seen since the jingoistic era of Theodore Roosevelt.”

The dark undercurrent of virulent racism and nativist paranoia that has lay dormant in American society for decades has been awoken by the blundering campaign of Donald Trump, who plays with ethnonationalist and protofascist sentiments like a child with matches, willfully ignorant of the long term damage he will cause should they catch afire.

Add your name to call on prosecutors to ARREST DONALD TRUMP for his crimes!Advertisements
Tags
KKK style Trump