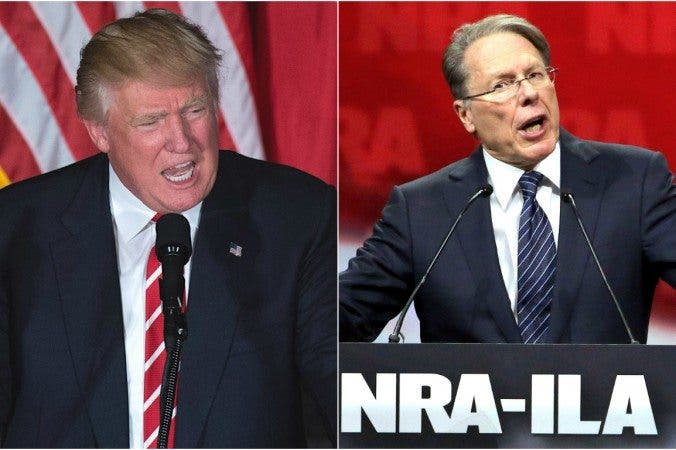 Watch: NRA Pulled Strings To Get This Anti-Gun Ad Removed From 38,000 Websites

Veterans’ groups are infuriated with the National Rifle Association over a pro-Trump, anti-Hillary ad that invokes the lives tragically lost in the September 11, 2012 terror attack on the American embassy complex in Benghazi, Libya. Slamming the lobby of blood profiteers for “using our dead to score political points,” veterans groups made clear once again that they are enormously frustrated with Donald Trump’s insistence on wrapping himself in the flag and using our veterans to score some cheap nationalist points.

“We fought for everybody’s First Amendment rights and everything, but we don’t want any candidate using our dead to score political points” said Joe Davis, a Veterans of Foreign Wars national spokesman. VoteVets.org immediately issued a statement saying “This ad should be taken down immediately. It is insensitive to those buried at the cemetery — most, if not all, of whom died before Benghazi, and many of whom may not have been NRA supporters. Further, it violates Veterans Affairs policy. It should be taken down.”

The NRA and the Trump campaign have ignored all requests for comment and refuse to take down the clip. The ad features a survivor of the attacks, Mark Geist, saying “Hillary as President? No thanks. I served in Benghazi. My friends didn’t make it. They did their part. Do yours.” It’s a disgusting – and illegal – use of our dead warriors for a cheap and baseless political attack against one of our nation’s most dedicated public servants.

The Department of Veterans Affairs National Cemetery Administration demanded that the footage be cut, as they have not received or approved any filming requests. “NCA did not receive a request from the NRA to film the subject advertisement. If we had received such a request, we would have denied it based on the partisan content. Partisan activities are prohibited on national cemetery grounds as they are not compatible with preserving the dignity and tranquility of the national cemeteries as national shrines.”

Trump’s relationship with our fighting men and women has always been a rocky one. From his overhyped “fundraisers” and promises of donations to veterans groups that never materialize to his disparagement of war heroes like hopefully soon-to-be-ex Senator John McCain (R-AZ), accusing our Iraq veterans of stealing from the government and his long history of firing veterans, it’s clear that our vets – like the rest of the American people – only matter to Trump while they can help him further his ambitions. Trump only cares about one person – Donald Trump – and he has no shame in exploiting the sacrifices of others for his own selfish agenda. It’s an absolute disgrace to see a lobby responsible for tens of thousands of American deaths so callously mocking the sacrifices of real warriors who died in the line of duty.

Add your name to call on prosecutors to ARREST DONALD TRUMP for his crimes!Advertisements
Tags
style veterans