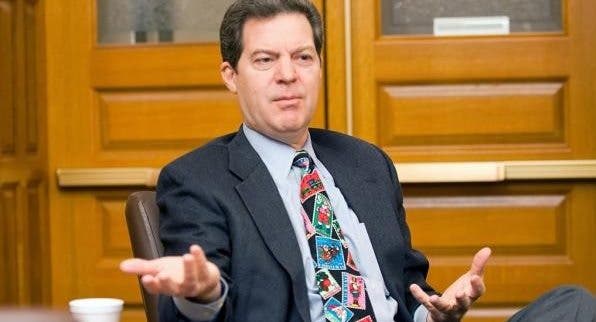 Governor Sam Brownback of Kansas has sent his state’s budget so deep into the gutter with his failed Tea Party economic experiments that it is now being jokingly referred to as “Brownbackistan.” Indeed, the poverty and colossal economic mismanagement that blew a $1.1 billion hole in the state’s budget would not look out of place in a post-Soviet republic ruled by an ideological dictator. But dictator Brownback rules the heartland of the United States as his own personal fiefdom while the common people suffer under his yoke.

To complement the bleak picture we’re painting, consider that Brownback and other members of his administration have been caught using public funds to pay for private jet use as they embark on family vacations or other personal trips. The Governor was caught spending thousands to fly himself to Tennessee for a Kansas State basketball game – which he was roundly criticized for, seeing as he attempted to slash $200 million in public education funds but was rebuffed by the State Supreme court which called the cuts “unconstitutional.”

It is disgusting to see these Republican legislators travelling in luxury while constantly attempting to pass different laws that poor-shame the victims of their egregious economic mismanagement and to make the lives of their citizens harder with draconian anti-abortion and anti-LGBT discrimination bills while literally bringing their state down around them with fracking-induced earthquakes.