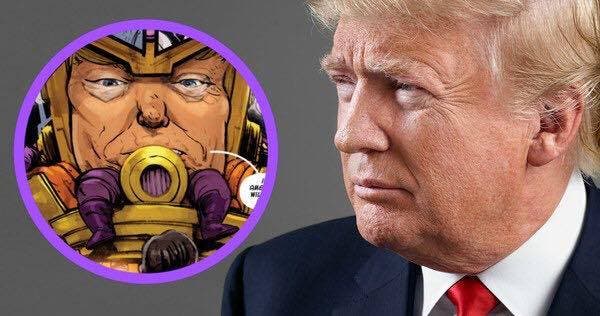 On June 29, Marvel Comics published Spider-Gwen Annual #1 – which featured a comic of none other than presumptive Republican nominee Donald Trump as a supervillain. The comic obviously does not name Trump, but the character closely resembles him with a similar jawline and the characteristic mop of suspiciously combed-over blonde hair. As he battles the black, female Captain America, the villain alludes to several of Trump’s most notorious beliefs and remarks.

With an umber hue, golden suit and dislike of “foreign filth”, MODAAK appears to be a riff on US presidential candidate Donald Trump. The name MODAAK references Trump’s worryingly totalitarian expressions of his ambition. Trump has stated that he wants to change libel laws so it is easier to sue news organizations, effectively imposing restrictions on the press’s freedom. He argued that the federal Judge Curiel cannot oversee a civil suit about fraud at Trump University because of his race; Trump also hinted that his civil suit would go better once he is president – in other words, he thinks he will influence in the judiciary’s functioning, even in his own lawsuits.

MODAAK calls a man of color “foreign filth,” despite his protestations that he is an American from Waco, Texas. This particular incident represents Trump’s xenophobia, which has focussed its attacks on Hispanics in America. Trump has portrayed Mexican immigrants as criminals and rapists, and he has painted an image of Hispanic citizens and residents as not fully American.

Finally, MODAAK attempts to “crush” female Captain America in his “giant hands.” Trump’s unusually diminuitive hands have become a running joke ever since Trump responded to then-candidate Marco Rubio’s comment that Trump’s small hands mean he can’t be trusted, by jumping to the assumption that small hands must mean that he has a small penis, which is of course what all American are most worried about in their presidential candidates. The fact that he responded in a way that an overly defensive frat boy would tells you all you need to know. In the end, Captain America smashes minority-hating, authoritarian-wannabe MODAAK with her shield, and all is well in the Land of the Free. The country is safe from tyranny, and the values of personal liberty, racial and religious equality, and separation of powers in government reign. A Trump presidency poses such a great threat to American values and institutions that he can fairly be portrayed as a supervillain. In November, the American people will have to make a critical choice for the country’s future – and there won’t be any Captain America around in case things go horribly wrong.