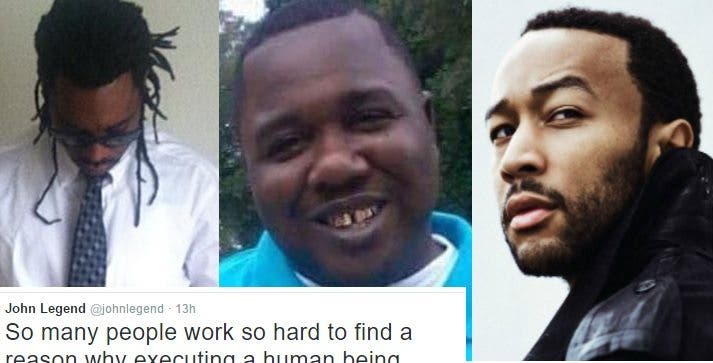 Music icon John Legend took to Twitter today to give his two cents on this week’s string on the horrifying police murders of Alton Sterling and Philander Castile, slamming all the alt-right conservatives and white supremacists who shield themselves behind the police badge – the “All/BlueLivesMatter” crowd and continually try to twist the narrative to blame the victims for their own deaths – the same way that this crowd of oppressors blames the victims of mass shootings for their own deaths and rape survivors for their own assaults.

@TedHallerFox9 @tweetemilysears dear people, if you dont want to get shot, FOLLOW the cops orders

Mr. Legend took issue with such grossly disingenuous and deflective attempts to rewrite the narrative to one which excuses to police officer for murdering black Americans in cold blood without trial or charges, and then somehow placing the blame back on the dead for their own actions.

We should not have to jump through hoops to prove black people shouldn’t be shot by police during routine traffic stops.

We have fucking video proof and some of you still are all “well, uh, he shouldn’t have moved his left leg so provocatively”.

So many people work so hard to find a reason why executing a human being during a routine traffic stop is ok. IT’S NOT OK

Mr. Legend also took the time to make it clear that he is not “anti-cop” or trying to disparage the thousands of police officers who serve their communities with honor and dignity, but is merely furious at a system which never holds murderous cops accountable and never delivers justice for the victims of police shootings:

@AllyKane88 it’s horrible. I have family that are police. But I know the full weight of the law will be brought on a cop killer.

Mr. Legend is absolutely right. It is clear that we are facing an epidemic of police violence that disproportionately targets black Americans – and that there are far too many white Americans who don’t see this as a problem. Let’s face it, the most voracious cop supporters are alt-right or heavily conservative Americans who say that they like Donald Trump “because he’s a straight talker” and seem to believe that immediate execution is an appropriate punishment for resisting arrest or not immediately complying with a police officer.

The truly infuriating thing about their line of thinking is the hypocrisies within hypocrisies – for these are the same people who argue that they should be allowed to own assault rifles in order to resist the “tyranny” of government while blindly defending the police, who are the agents of government. They have been granted the state monopoly on violence and would be the distributors of tyranny should it ever come to it, but any questioning of their methods is disparaged as an endorsement of criminality – which is in itself a barely disguised racial attack.

They cry that the victims of mass shootings should have had guns to defend themselves, but are silent when a black man is shot by the police for exercising his Second Amendment rights. They howl and scream that not being able to purchase a hundred-round extended ammunition magazine is a violation of their rights and say nothing when black Americans are denied their right to a quick and speedy trial.

The “All/Blue Lives Matter” defenders are really defending the double standards which exist in the United States, the standards that protect white Americans and excuse their behavior while facilitating the slaughter of blacks. Their reactions offer a terrifying glimpse into what our nation would look like under President Trump.

Colin Taylor
Opinion columnist and former editor-in-chief of Occupy Democrats. He graduated from Bennington College with a Bachelor's degree in history and political science. He now focuses on advancing the cause of social justice and equality in America.
Latest Posts
Tags
#blacklivesmatter john legend police style