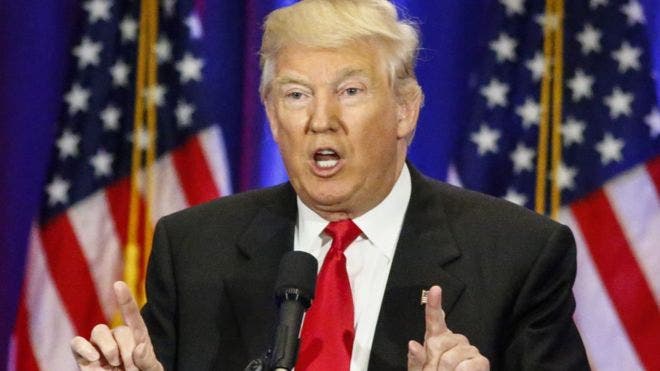 Republicans have inevitably turned a blind eye to the most hideously corrupt Presidential candidate in the history of the United States: Donald J. Trump. New Yorker tore to shreads Trump’s weighty conflicts of interest running for President as a real estate developer and brand marketer, which has turned him into the kind of candidate who pitches one of his failed business ventures like “Trump Steaks” after winning a primary election. NY Mag recently published a brutal op-ed in which they slammed the candidate for openly running his campaign as a way to enrich himself:

Trump has not merely intermingled campaigning with his business interests; the two are one and the same. His entire political career seems to be an outgrowth of his efforts to build his personal brand, which Trump has endlessly used the campaign as a platform to promote. He has devoted speeches to attacking the judge in the fraud suit against his “university,” instructed surrogates to do the same, and promised to relaunch the enterprise if elected. He celebrated the Brexit vote, which drove down the value of the pound, as helpful for driving visitors to his Scottish golf course. This sort of behavior is not an appearance of a conflict of interest but the definition of one.

If Trump’s crooked business dealings just ended at shaking down regular Americans across the country in get-rich-quick schemes, it would be gross enough. But the presumptive Republican nominee for President took that a thousand steps further. Trump’s nightmarish casino swindling left longtime employees without healthcare since the fourth and final bankruptcy, leading to an ongoing worker’s strike at Trump’s Taj Mahal extending through the 4th of July, while Trump made millions off the hotel’s staff and creditors’ pain with the same self-dealing thievery his political campaign exhibits today.

It’s worth noting that Donald Trump is a symptom of the Republican party’s generally upside-down thinking, which is typified by House Speaker Paul Ryan’s feeble attempts to forbid President Obama’s national security staff from even speaking with Hillary Clinton – which every major presidential candidate has received since Democrat Harry Truman started briefings in 1952. Meanwhile, Paul Ryan’s own disastrous Republican presidential candidate is such a foreign affairs expert that he frequently spews lies grasping for any reason to praise genocidal Iraqi dictator Saddam Hussein, and thinks Mexico will pay for an American border wall too. Even firebrand religious extremist Republican Senator Ted Cruz – whose insane ideas include transporting American money back to the 19th century’s “gold standard” – brought up serious doubts during primary races about letting Donald Trump even put a single, short finger anywhere near our nation’s nuclear arsenal.

It’s no coincidence either that the Republican presidential nominee discarded his female-journalist-bullying former campaign manager, ex-cop Corey Lewandowski, for the dirtiest Republican insider he could find: Paul Manafort. Republican Presidential campaign manager Paul Manafort’s major business interests lie in working with pro-Russian Ukrainian politicians (forced from office for hoarding billions in state funds), and who ran the racist “Southern Strategy” for Ronald Reagan’s 1980 Presidential campaign which launched in Philadelphia, Mississippi. The New Yorker took this all a step further calling out the Republican as a ‘Manchurian Candidate’ and naming the the adult with a hand inside the little-fingered, blond toupee-d Trump puppet as none other than Vladimir Putin. The Russian dictator and former KGB spymaster has a long history of supporting anti-NATO candidates for office, and isn’t afraid to gamble big.

Trump is not merely comfortable doing business with criminals and thugs — his habits of manipulating bankruptcy laws and swindling his partners have left him reliant upon, let us say, unconventional sources of investment, many of whom are the scum of the Earth. Franklin Foer lays out impressive circumstantial evidence that Trump may well be a puppet of Vladimir Putin, with whom Trump shares a web of financial ties that help explain their shared worldview. Whatever we might think of Clinton, we can be confident she is not controlled by the Kremlin.

Vladimir Putin despises free speech, and institutionalized homophobia in Russian law two years ago, and hands out awards to anti-gay politicians for fun. Trump used to be considered unusually sane in LGBT rights issues, until suddenly this month he hired Paul Manafort. The presumptive Republican nominee fell on both his hands and knees to openly pander for votes in North Carolina from bigots, by proclaiming his support for the despised Governor Pat McCrory in a rally yesterday, as Trump suddenly supports their draconian transgendered bathroom discrimination law.

The on its face conflicting interests presented by Donald Trump’s obvious foreign business interests is appalling, as is his advice from the right hand of dictators and thieves. A President shouldn’t be the shakedown artist in charge of shady operations the presumptive Republican nominee uses to fleece the public with his once shiny name, a Trump name now stained forever by political bribery, race hate and petty thievery.

Are those words Americans should ever have to worry about when picking the President of the United States?