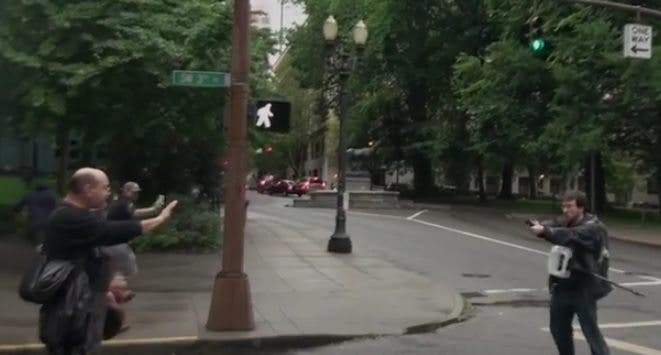 Contributed by Noone Danger Marshall of Portland, Oregon:

Michael Strickland, AKA Laughing at Liberals, is a right-wing Republican blogger whose bread and butter is YouTube clips of stupid people saying and doing stupid things at left-leaning protests. I suspect Michael considers himself a responsible gun owner, and people like him are why it’s so easy to believe that responsible gun owners are about as common as leprechauns, unicorns, and Chicago Cubs World Series wins. If you’ve attended protests, you know there is no lack of stupid people at any of them, regardless of political leaning, it’s the sad result of the right-wing’s war on teachers and their unions, which has led to poorer education and the dumbing down of America.

Michael doesn’t handle himself well under pressure, so if this is what the NRA and Republicans think responsible gun ownership looks like, we’re all in a great deal of trouble. He could’ve easily killed one of two dozen people in the crowd, and in the 12th second of the 90 second video below, the journalist who caught it all on video. Fortunately for the protestors, local activist and PINAC News correspondent, Mike “Bluehair” Smith, was there to talk Strickland down. Unfortunately for Strickland’s expanding rap sheet, Bluehair also caught the entire incident on video.

The conservative blogger frantically brandished his presumably loaded weapon in public and swept his aim towards a sizable crowd right there on Portland’s Main Street. Strickland is a Ron Paul conservative, so it’s hard to say that this represents a good example of their much discussed and little seen trope about non-aggression. Or maybe Strickland didn’t know how to keep his gun pointed up or down, and we’re lucky to be witnessing just another arrest, instead of a multiple shooting incident by someone who perhaps replied too much upon gun ownership and too little upon common sense, de-escalation of verbal situations and thrust himself into a situation where he lost control, of himself, near so many other people. So, it’s pretty ironic that he is now making news himself doing something laughably stupid to become big news himself by pointing his extended magazine handgun at the large, but peaceful crowd of people protesting, which almost any reasonable would consider a menacing intimidation. Especially considering that Strickland has produced videos shown that he is politically opposed to intimidation.

It’s clear that the journalist Michael “Bluehair” Smith felt threatened as the extended video shows. If Smith hadn’t been willing to put himself in harm’s way, how would this have ended? Had there been a “good guy with a gun” at the protest, what would have happened? Fortunately we’ll never know, but you can mark this one down as another entry in the “stupid people doing stupid shit” column, which Republicans and especially Trump supporters are rushing to fill this summer.

To Michael Strickland, we respectfully suggest a new name for your video channel and “Laughed At By Liberals” seems to be available. Might want to jump on that before it’s gone.

Full (top) and 90 second video of the whole incident and arrest here: