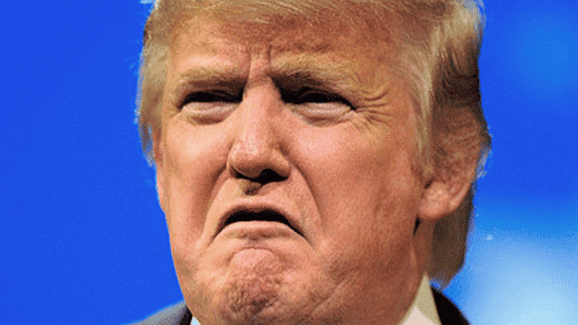 Donald Trump’s toxic racism and arrogance have quickly been robbing him of the few friends and allies he has, with dozens of top Republican officials and pundits refusing to support their party’s nominee or even dropping the GOP and the bombastic hate circus it has become altogether. Indeed Trump’s world has grown so small that he has even ventured his daughter – and romantic interest – Ivanka as a potential running-mate.

Throughout it all, however, he has always fallen back on his image as a scion of the upper-class. Whenever his intelligence comes under question – which is rightfully quite often – he is quick to remind everyone that he went to the prestigious Wharton School of Business at the University of Pennsylvania. How much his father’s wealth and image contributed to his admittance is another issue, but quotes like “I went to the Wharton School of Finance. I’m, like, a really smart person.”

The actual students of Wharton, however, seem to think differently about one of their most famous graduates. 1,079 Wharton students signed an open letter published yesterday entitled “You Do Not Represent Us,” and that sums up their sentiment pretty well. The students described themselves as “disappointed” and “outraged” by the candidate’s behavior and essentially ripped him to shreds. Here is the letter in full:

At the Wharton School of the University of Pennsylvania, students are taught to represent the highest levels of respect and integrity. We are taught to embrace humility and diversity. We can understand why, in seeking America’s highest office, you have used your degree from Wharton to promote and lend legitimacy to your candidacy.

As a candidate for President, and now as the presumptive GOP nominee, you have been afforded a transformative opportunity to be a leader on national and international stages and to make the Wharton community even prouder of our school and values.

However, we have been deeply disappointed in your candidacy.

We, proud students, alumni, and faculty of Wharton, are outraged that an affiliation with our school is being used to legitimize prejudice and intolerance. Although we do not aim to make any political endorsements with this letter, we do express our unequivocal stance against the xenophobia, sexism, racism, and other forms of bigotry that you have actively and implicitly endorsed in your campaign.

The Wharton community is a diverse community. We are immigrants and children of immigrants, people of color, Muslims, Jews, women, people living with or caring for those with disabilities, and members of the LGBTQ community. In other words, we represent the groups that you have repeatedly denigrated, as well as their steadfast friends, family, and allies.

We recognize that we are fortunate to be educated at Wharton, and we are committed to using our opportunity to make America and the world a better place — for everyone. We are dedicated to promoting inclusion not only because diversity and tolerance have been repeatedly proven to be valuable assets to any organization’s performance, but also because we believe in mutual respect and human dignity as deeply held values. Your insistence on exclusion and scapegoating would be bad for business and bad for the American economy. An intolerant America is a less productive, less innovative, and less competitive America.

We, the undersigned Wharton students, alumni, and faculty, unequivocally reject the use of your education at Wharton as a platform for promoting prejudice and intolerance. Your discriminatory statements are incompatible with the values that we are taught and we teach at Wharton, and we express our unwavering commitment to an open and inclusive American society.