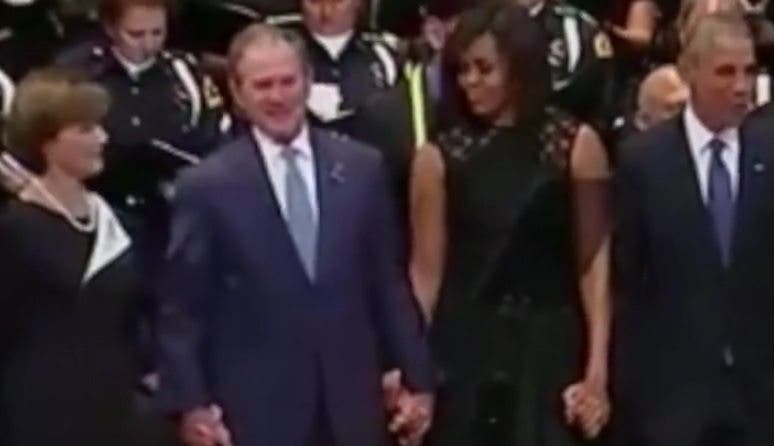 The Republican Party Has Released Their Platform For The 2016 Convention, And It Is INSANE

Former President and war criminal George W. Bush treated the singing of “Hallelujah” at the memorial service for the officers slain last week at a Dallas protest with the sanctity and reverence it deserved – by beginning to dance during the singing.

First Lady Michelle Obama looks absolutely mortified at the behavior of Pres. Bush. The kicker, of course, is that if a Democrat had behaved the same way, the right-wing would be ablaze with condemnations, but this is likely to be simply ignored as the bizarre quirks of a lovable old man who happens to be responsible for wrecking the global economy and destabilizing the entire Middle East with his cavalier neocolonial military excursions in Iraq, a war which we are still fighting.

Social media, of course, had a field day.

LAURA: George, be on your best behavior.
GEORGE: Of course I will!
LAURA: No dancing.
GEORGE: … pic.twitter.com/qNnyTWbe6i

POTUS: [leans over to Michelle] Just go with it. *sigh* pic.twitter.com/ml4fYywjNN

Why is George Bush dancing like this is a pep rally??? #optics

George Bush is dancing. This is it. He forgets why he is here.