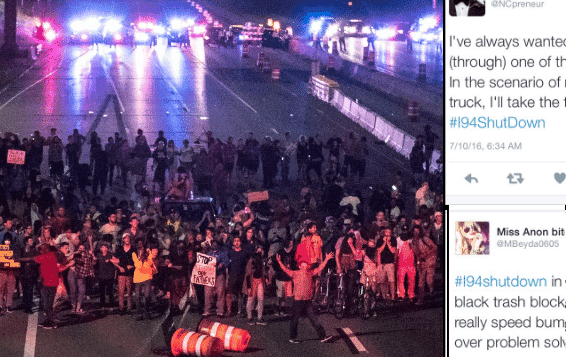 Conservatives across social media are unwittingly showing their true colors and highlighting the fact that it is naked racism, and not some sort of misplaced support for police officers, that is driving the backlash against BlackLivesMatter protesters. The ease with which right-wingers on the internet will call for the deaths of anyone who dares to protest the rampant injustice and systematic discrimination that white males have imposed on the American people is truly astounding.

When protesters shut down the I-94 highway in Minnesota, this is how the #AllLivesMatter crowd responded.

“Stop protesting how casually lives are snuffed out or I will gleefully commit vehicular manslaughter!” #i94shutdown pic.twitter.com/ECFfjbKbdg

If #AllLivesMatter the opposition would read: “I do not support this protest but I hope they are dealt with fairly & that no one gets hurt.”

#BlueLivesMatter & #AllLivesMatter are MIIIIIIIIIIIIGHTY quiet about the white man who shot up a courtroom yesterday pic.twitter.com/31LiLa2Wlh

The police responded with tear gas, which the United States is treaty-bound to not use in war but apparently is free to use on their own people.

It highlights just how empty their calls of #AllLivesMatter truly are. The only lives they seem to care about are white lives; when Latinos and blacks are gunned down by police officers, conservatives fight to blame the victims and demonstrate how they somehow “deserve” it. It’s really upsetting to see how corporate media – like they do to every right-wing response, no matter the issue – gives a platform and implied legitimacy to the absurd and baseless narratives that these bigots concoct. There is no war on the police. Black people are vastly disproportionately more likely to be targeted by the police. President Obama is not dividing the country. But no coverage is given to the casual way in which hypocritical right-wingers casually call for the deaths of protesters.