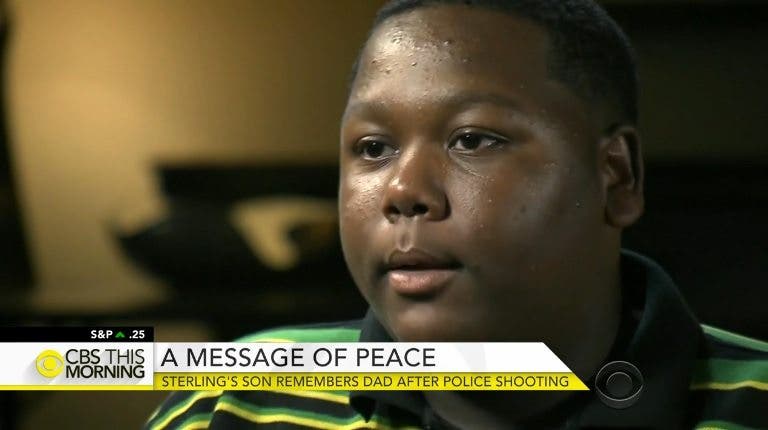 CORRUPT TRUMP: How Donald Dumped 24 Million Gallons Of Raw Sewage Into Hudson River, Bribed His Way Out Of It

Alton Sterling’s young son,  fifteen-year-old Cameron, spoke CBS News about the protests that have flared up following the execution of his father and of Philando Castile in Minnesota by police officers – and about the apparently retaliatory massacre that took place at a protest in Dallas.

Cameron channeled wisdom far beyond his years as he beseeched the protesters around the nation to be peaceful – and for the police to respond in kind, without beatings or pepper spray or rubber bullets. But first, he spoke out against the right-wing’s efforts to demonize his father.”I really want everyone to know, everyone in the nation, everyone in the world to know that Alton Sterling was a good man, no matter what anyone else has to say about him, in my heart I know he was a good man.”

With an inappropriate air of smugness, the interviewer asks the boy what he thins of the police these days, who answers quite reasonably that “they all aren’t bad. There are some that are bad, but all aren’t bad. How I feel? I feel all police shouldn’t be punished for other police’s crimes. The police in Dallas, Texas… they didn’t deserve that because, nobody knew if they had kids to go home to. Those kids need their parents.”

When asked what he would say to the protesters, Sterling replied: “Keep protesting, but what I ask if you truly love my father, to protest the right way—protesting in peace. Not in violence.” He added, “Not beating the police, not police beating the people. That makes no sense. That make things worse. You have to make things better by making peace.”

We hope the protesters around the nation take his words to heart. There is very clearly something wrong in our nation, when the casual murders of black Americans are excused and ignored by the police establishment and peaceful protesters are being met by armies of riot police in helmets and shields, batons and tear-gas, rolling up in heavily armored vehicles, looking every bit the dystopian security force. We must continue protesting, at the very least to assert our right to protest, which is looking like it is in more danger with every passing day.