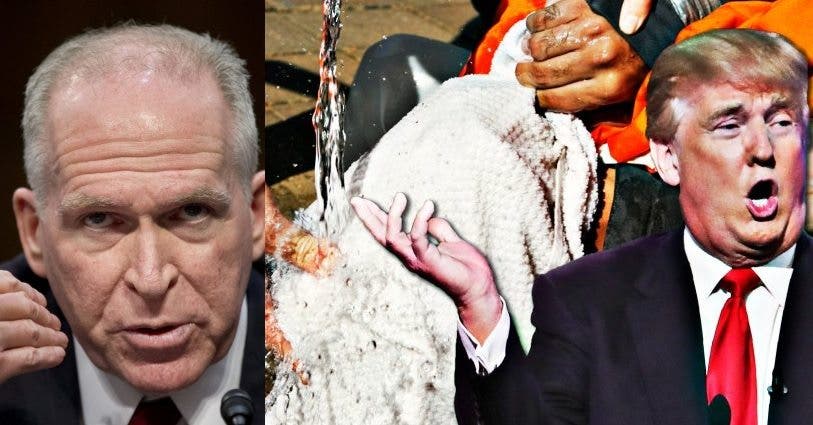 The use of torture and brutal interrogation methods such as waterboarding for deriving human intelligence from enemy combatants has been banned under both U.S. and international law for decades. Though as one UK judge observed in 2006: “America’s idea of what is torture … does not appear to coincide with that of most civilized nations.”

While John Brennan has, in the past, supported “the use of the Bush-era techniques, he recognized that his agency was thrust into a tempestuous period that had great impact of the international standing and reputation of the CIA. Yesterday, Brennan doubled down on his April statements – in remarks at the Brookings Institution, a Washington based think tank, he said “I’m not going to be the director of CIA that gives that order. I think they’re going to need to find another director.”

John Brennan, the CIA’s current director, was appointed to the post by President Obama in 2013.  Brennan told NBC News in April, seemingly in response to Trump’s assertion that he would bring back waterboarding and worse, that his agency will not use enhanced interrogation practices: “I will not agree to carry out some of these tactics and techniques I’ve heard bandied about, because this institution needs to endure…even if ordered to by a future president.”

The CIA, a clandestine U.S. government agency tasked with gathering and analyzing classified national security information from around the world, has had staggeringly sordid past. The agency is guilty of having a hand in international political assassinations and backing illegal coups, thus fomenting chaos around the world in the guise of our national interest that, for the most part, has come back to punish us decades later.

Additionally, the CIA had come under intense scrutiny for its use of torture during the Bush years on prisoners captured as a result of his illegal war in Iraq. In fact, in December 2014, the Senate Intelligence Committee issued what The New York Times called “a sweeping indictment of the Central Intelligence Agency’s program to detain and interrogate terrorism suspects in the years after the Sept. 11 attacks, drawing on millions of internal C.I.A. documents to illuminate practices that it said were more brutal — and far less effective — than the agency acknowledged either to Bush administration officials or to the public.”

Despite Trump’s seemingly infinite, mean-spirited capacity to say anything that comes to mind and to insult any person who is not white, The Washington Post noted that over the years he has been consistent on “1) America is on the wrong track, 2) the rest of the world is laughing at us and 3) projecting strength is the answer” – translation –  “make America great again.”

One has to wonder how Trump’s boorish threats and campaign rhetoric to bring back torture — showing seemingly wanton and mindless disregard for the law, the CIA and the international reputation of the United States — is in fact going to make America great again.