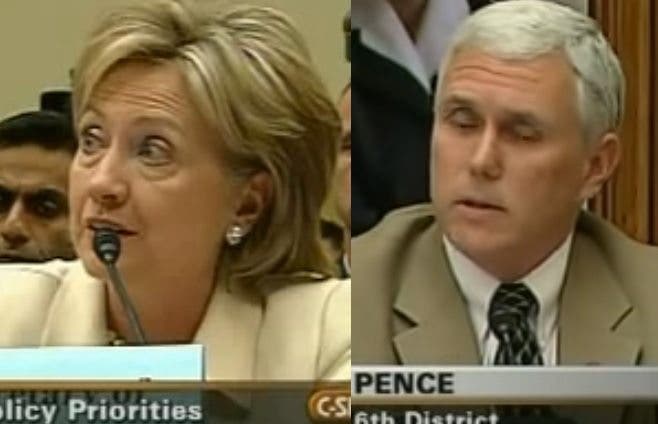 In this blast from the past, Democratic nominee Hillary Clinton shuts down Trump’s vice presidential pick, Mike Pence, in an epic showdown in the House Foreign Affairs Committee. Pence, complaining about the implications of having President Obama meeting the President of Venezuela, Hugo Chavez, and the idea that he was being used for “propaganda.”

“Isn’t it true that having the President of the United States be seen on the world stage warmly greeting a virulent anti-American socialist dictator that intentionally or unintentionally our president was used for propaganda purposes? And isnt it also true that as Natan Sharansky observed, there’s nothing more demoralizing to people who are fighting for freedom in their own country to see the leader of the free world in friendly association with the very people that are pressing them?”

Then-Secretary of State Clinton lets him have it in a very sophisticated fashion that highlights what kind of true leadership she exudes – and knocks him out of the park for the double standard he holds President Obama to in comparison to the behavior of other past presidents.

“That is my bottom line, Mr. Pence. My bottom line is: I am here to serve my country, which I have loved ever since I was a little girl. And I’m going to support my president, because he is committed to doing whatever he can in the time he is given to serve to make this a better, safer, more secure world.”