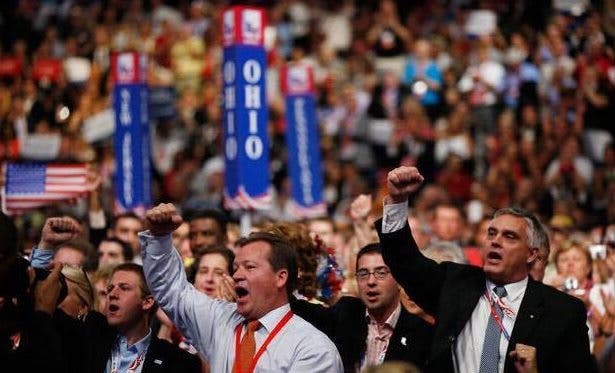 The Republican National Convention tonight made clear where its priorities lay tonight when the notorious Uncle Tom, Milwaukee County Sheriff David Clarke, openly praised the officers who were acquitted in the murder of citizen Freddie Gray in Baltimore – to raucous cheers.

“This is a WAR, and Black Lives Matter is the ENEMY!” yelled America’s most shameless “sheriff,” a black man who regularly accepts large cheques from FOX News in exchange for being the black man willing to say the horrendously racist and disparaging things against black people that the majority of FOX employees are not allowed to say.

Freddie Gray was loaded into a van with his arms and legs shackled together but no seat belt, then was taken for what is referred to as a “rough ride” or a “nickel” or the “bounce,” where the police purposefully drive in a violent manner in order to cause “inadvertent” injury to those in the back. Freddie Gray broke his spine and had a crushed larynx, injuries from which he died – for the crime of holding a pocket knife. Six police officers have been charged in his death, but so far the four who have gone to trial have all been acquitted with no charges.

Clarke declared that the trial itself was “malicious prosecution” by liberal “activist state’s attorney Marilyn Mosby.” Mr. Clarke, far from being a defender of the law and of justice, is advocating for the summary execution of those deemed to criminals, with no repercussions or even questions asked of the killers. That badge says “protect and serve” -and not what a police sergeant on the true events inspired Baltimore-set television show the Wire once said, “Collect bodies. Bust heads. The Western District Way.”

Freddie Gray, as it happens, died in Baltimore’s Western district. It’s obvious that things haven’t changed much. Having one of America’s most publicly prominent law enforcement officers simply excuse the kind of brutality shown to Mr. Gray shows that the culture of policing in America has changed drastically. No longer is it engagement with the community. The police behave like an occupying army, busting heads, collecting bodies, filling stat sheets, entirely desensitized from the communities they were ostensibly supposed to protect.

This is the America that the Republican Party wants to see – an America where four white men are cheered for throwing a black man in a van and driving violently until he died. The utter lack of consequence proves that black lives DON’T matter to the Baltimore Police Department, and they don’t matter to the Republican Party – and they are thus not worthy of holding the presidency if they won’t fight to uphold the rights and the safety every citizen, no matter their race or religion.