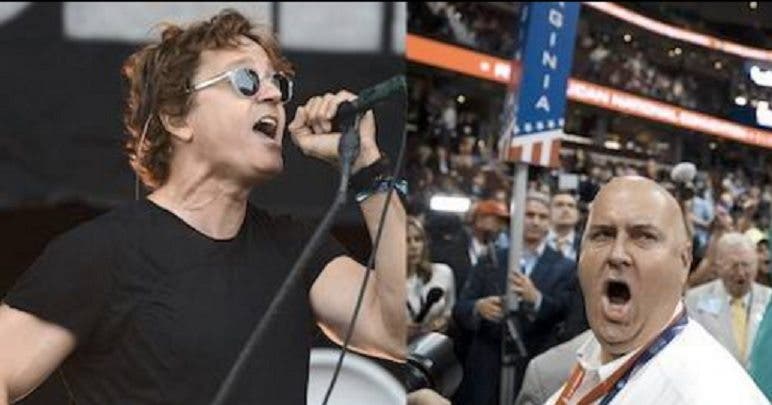 UPDATE: Third Eye Blind released a statement on Facebook about their epic night of trolling:

We have Republican friends, family members, and fans, and we love them all. What we reject is what their party has come to stand for. But in keeping with Musicians on Call’s message, we believe in the gathering power of music. With that spirit we don’t step back from our audience wherever or whomever they are.

Rock band Third Eye Blind is trending on worldwide social media for the first time ever, after trolling Republicans for denying science, eroding the civil rights of LGBT Americans – and having the stones to keep going after drawing tons and tons of loud boos.

Normally, bands line up to play at Cleveland’s Rock and Roll Hall of Fame, but Republicans had a difficult time finding any band willing to play a show during their national convention, when many musicians followed Eagles guitarist Joe Walsh, who backed out of a show there upon finding out that the audience would be RNC attendees.

So, the task of entertaining a raging pack of angry bigots passed from one of the top 60 guitarists of all time, all the way down to Third Eye Blind.

But Third Eye Blind had other ideas: that rather than boycott bigots, they’d confront Republican intolerance and bigotry face to face at the charity event nobody wanted to play, and call it out while on stage – as you can see in the videos below.

The show didn’t get off to a swimming start when Third Eye Blind’s lead singer asked the Republican crowd “Who here believes in science?”  Most of the crowd had just watched Florida’s big sugar-polluting, climate-change denying Republican Governor Rick “I am Not a Scientist” Scott speak to the Trumpublican National Convention goers. The audience reception was so bad, that even the head of Snapchat News had to tweet that there was “so much booing,” so the message would last longer than 24 hours.

Epic @ThirdEyeBlind troll of RNC event. Played none of the hits, bashed GOP platform, asked "Who here believes in science?" So much booing.

Then Jenkins dropped a PSA to the gathered Republicans that he “fully invites his cousins who are gay, into the American fabric,” and in then reach out to the numerous closeted Republicans seeking down low loving at the RNC he told them, “to not life your life in fear and to stop imposing that fear upon other people.”

Then the aging stars ripped into another old hit song, “Jumper” bringing cheers from the crowd who only moments ago shrieked and booed because they despise tolerance. But it’s obvious that the musicians only played that one hit song because of it’s lyrics, which start by begging someone to get back to reality, and ditch their lying ways, advice the Republican Party should heed, fast:

I wish you would step back from that ledge my friend,
You could cut ties with all the lies, that you’ve been living in.

Even the Huffington Post’s senior justice writer got into the act, and captured this gem of their lead singer telling the crowd that, “You can boo all you want, but I’m the motherfucking artist up here.” Then, they sang a song about the religious extremist, GOP tripe that gay marriage would destroy traditional marriage, which concludes when two gay Republicans get married.

Third Eye Blind wrapped up the show by leaving the audience wanting more, literally, when they exited stage right without playing their big hit song “Semi-Charmed Life” which pissed off RNC guests so much, they had nothing better to do than kvetch to their Uber drivers about the snub.

Speaking for all Republicans, @lwhitegirlprob summed up the moment perfectly, and unknowingly teed up Third Eye Blind for the most glorious, one-word conclusion ever to cap their night of epic trolling.

Grant Stern
is the Executive Editor of Occupy Democrats and published author. His new Meet the Candidates 2020 book series is distributed by Simon and Schuster. He's also mortgage broker, community activist and radio personality in Miami, Florida., as well as the producer of the Dworkin Report podcast. Grant is also an occasional contributor to Raw Story, Alternet, and the DC Report, and an unpaid senior advisor to the Democratic Coalition and a Director of Sunshine Agenda Inc. a government transparency nonprofit organization.
Latest Posts
Tags
#RNCinCLE style Third Eye Blind