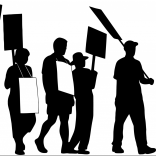 As Donald Trump gets ready to formally accept the Republican Party nomination tonight, his campaign is already running into legal trouble. This time, it arises from a complaint filed with the Federal Election Commission that alleges his use of the Trump Organization to do his political dirty work is a violation of federal law.

“The complaint alleges five violations including illegally accepting direct corporate contributions, accepting services from a volunteer that were actually compensated, use of the Trump corporate name or trademark to facilitate campaign contributions, illegal use of corporate facilities by a campaign volunteer, and knowingly allowing volunteers to exceed the transportation expense limit,” said the Democratic Coalition Against Trump, the organization that filed the complaint with the FEC, in a statement.

The federal complaint comes just a day after a speechwriter for the Trump Organization took the fall for stealing First Lady Michelle Obama’s 2008 convention speech and slipping it into Melania’s. The complaint charges Trump with breaking federal campaign law:

Meredith McIver, a speechwriter for the Trump campaign, released her plagiarism apology letter yesterday made on the Trump Organization letterhead that stated she was working via the corporation to perform campaign responsibilities. The Trump campaign responded to calls from the Coalition for clarification, where Trump’s spokesman claimed that McIver was serving in a volunteer capacity to the campaign.

This remains clear: Trump claims to be a candidate free of corporate money, because he sees no difference  between a corporation and a person. The fact that an employee of the Trump Organization is “volunteering” for his campaign would be disconcerting at best, but the fact that she offered her resignation over the scandal is proof that campaign finance laws were broken here.

Yet, these are the same people trying to engineer an image of Hillary as being “crooked.”

The irony is, they will all cheer as this pathological liar and proven fraud accepts the Republican Party’s nomination tonight.