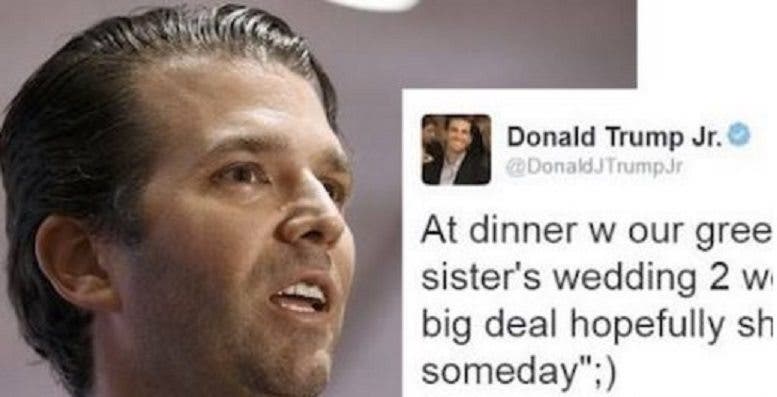 Donald Trump Jr. (2.0) proved himself to be a conman off the ole block just like his father while he was giving his speech at the Republican National Convention. Trump 2.0, while not yet as megalomanical, as he has not quite evolved to his full odious form, offered a string of gibberish about his father that would have pleased Goebbels. He began by stating, “He didn’t hide out behind some desk in an executive suite — he spent his career with regular Americans. He hung out with the guys on construction sites pouring concrete and hanging sheetrock. He listened to them and he valued their opinions as much and often more than the guys from Harvard and Wharton locked away in offices away from the real work.”

Can you picture Daddy Trump sitting on a high rise steel beam, eating a pastrami on rye out of a beat-up lunchbox like he were one of the guys? Please.

However Trump 2.0’s target audience is not thinking people, but hapless rubes who wish to be spoon fed what they want to hear — which is exactly what was on the menu. He continued, “I know he values those workers and those qualities in people because those are the individuals he had my siblings and me work under when we started out. That he would trust his own children’s formative years to these men and women says all you need to know about Donald Trump.”

His own children’s formative years? Didn’t Daddy Trump state in 2005 on The Howard Stern Show he had nothing to do with raising his children? Yes. He said, “I mean, I won’t do anything to take care of them.”

Does this imply Daddy Trump takes credit for Trump 2.0’s tweet when he bragged about their greenskeeper missing his sister’s wedding to work clipping their grass? Worry not, said Trump 2.0, as he was “at dinner” with the greenskeeper in question. He did not stipulate they were sharing the same table, or even eating together. He did state “luv loyalty 2 us.” Was the greensceeper cutting Trump 2.0’s meat for him? If the Trump family love their workers so much, and have such enormous amounts of respect for them, why wouldn’t they be disappointed for the worker to miss out on such a precious moment with their own families? The oblivious entitlement bubbles over for all to see!

One can expect these same values of entitlement to morph into an oligarchical mountain of pus if Donald Trump succeeds in capturing The White House, which is why it is incumbent upon all of us to do whatever we can do to fight against his candidacy. Lest each of us may soon become their next proverbial greenskeeper, starving and waiting for a crumb to fall from Trump’s table.