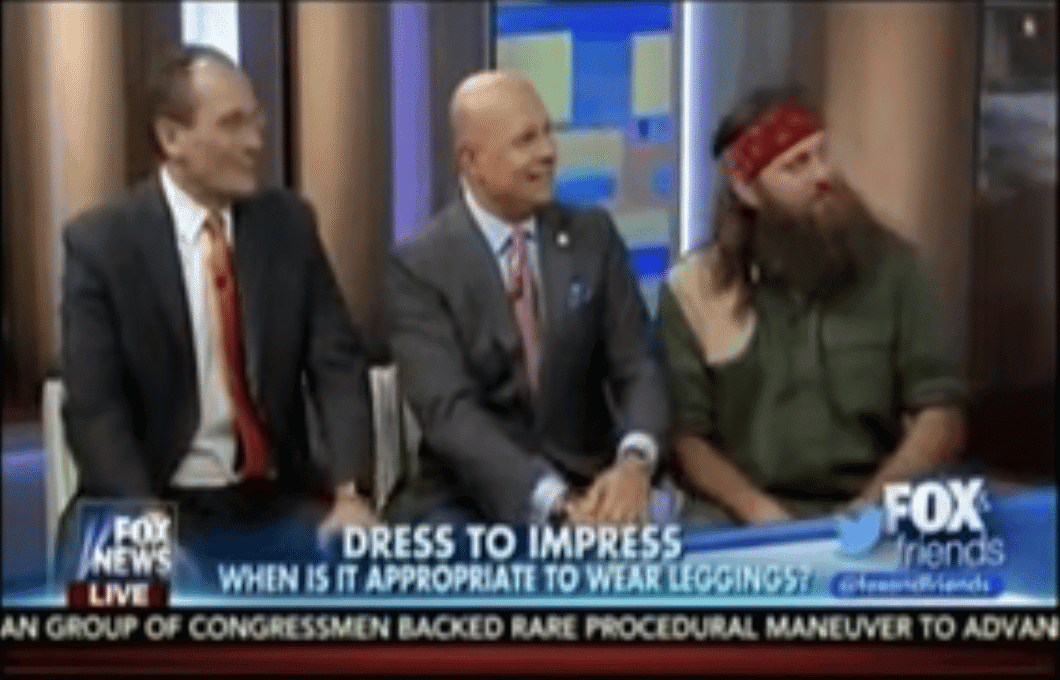 After a video of a woman declaiming that “leggings ain’t pants” went viral online, Fox News decided there was only one way to investigate the claim: ask fathers if they would let their daughters wear leggings in public. In a horrifying segment, three fathers, Willie Robertson, Arthur Aidala, and Andrew Sansone, assess the outfits of three young women in leggings.

The camera zooms in to pan up and down their legs, and briefly focuses on how visible their crotches are – because naturally in a segment supposedly about fathers protecting women from wearing sexually revealing clothing, we have to take a close look at just how sexy their different body parts look.

When the last woman comes out wearing purple leggings and a tank top, the crowd goes crazy with wolf whistles. The panel of men laughs and guffaws at the sight of an attractive woman in form fitting clothing. Aidala jokes, “We all took our nitroglycerin pills before she came out on the set just to make sure!”

As Sansone hesitates to comment on the outfit, seemingly because he is uncomfortable acknowledging his sexual thoughts on television, Aidala chastises him, “Step up! This is your daughter up there, son!”

Aidala then takes over as a ‘life line’ and begins his assessment by saying, “Obviously her physique, god bless you, you’ve worked out you’ve – you’ve earned that.” But the panel’s overall verdict is that, in the words of Robertson, “she needs a little bit more coverage.”

After having stood this young woman up on live television in front of a wolf whistling crowd just to have a group of middle aged men allude to their sexual attraction to her while criticizing her clothing choices, the anchor finally asks the woman how she feels about what she is wearing. He asks, “But you’re completely comfortable with this?” She firmly replies, “I am.”

Fox News has yet to grasp the simple concept that women can decide what clothing they feel comfortable in without having to consult a ‘panel of fathers.’ The segment was not about modesty. It was about criticizing the clothes that women choose to wear as being too sexy, while running eyes and cameras all over the women’s ‘sexiest’ body parts.

This is blatant objectification – treating women as nothing more than sexual objects who need men to help them govern their sexuality. We don’t have high standards for Fox News when it comes to treating women with dignity, but this is the worst we have ever seen.

Marisa Manfredo
Marisa completed her undergraduate degree in 2013 at the University of Wisconsin with a double major in creative writing and media studies. She is an advocate of progressive policies and focuses her interests on gender equality and preventing sexual and domestic violence.
Latest Posts