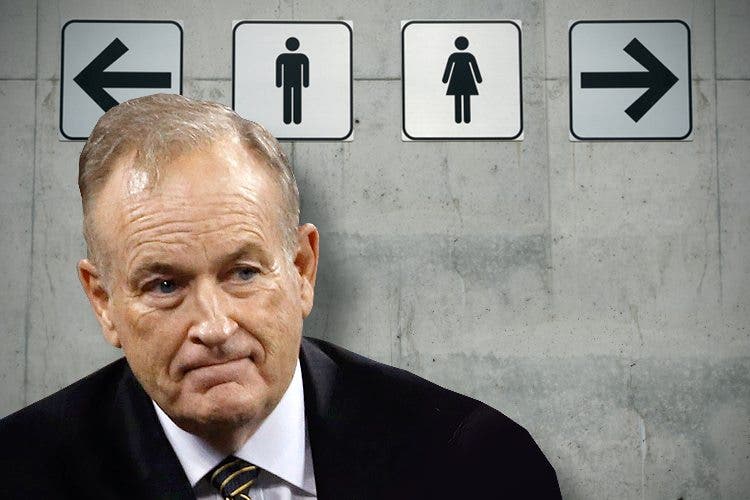 This morning senior Fox News journalist and analyst Elizabeth MacDonald appeared on Varney & Co. When the topic of conversation turned to fear mongering over transgender bathroom rights, MacDonald pointed out the Fox News studios already have unisex bathrooms. She called gender neutral bathrooms “a simple fix,” and refused to back down to Varney, who just kept saying that he, “doesn’t like it” and doesn’t want to change.

Fox News has had gender neutral bathrooms for some time, and the workplace has not descended into chaos in the absence of enforced gender roles. It’s almost as if letting individuals self-identify does not lead to an epidemic of crossdressing rapists hiding in public toilet stalls. The irony is that seeing as FOX CEO Roger Ailes just got fired for systematic sexual harassment and then ostracizing his female employees when they rejected his repulsive advances, the real threat comes from predatory straight men with a self-entitlement complex and an institutionalized disrespect for women.

VARNEY: That’s the direction we are going in. And I don’t like it.

MACDONALD: But there is an answer to it, and it’s already in place here at Fox, gender-neutral-bathrooms.

VARNEY: Why do we all have to change?

MACDONALD: They have them right outside the studio. It’s not changing —

VARNEY: Yes it is.

MACDONALD: Gender-neutral-bathrooms are out there already.

TAMMY BRUCE: But then the issue becomes schools —

VARNEY: Why do we have to change?

Tammy Bruce insists that the Fox News bathroom situation only works because it is for “adults,” but thinks it is unacceptable to introduce gender neutral bathrooms in schools where “kids” would be affected. Bruce doesn’t appear to grasp that even gender neutral bathrooms for kids feature stalls and/or individual rooms. A gender neutral bathroom is not an open plan room of anarchy, where naked people roam free and without consequences for their actions – it is just a bathroom with privacy for those who feel uncomfortable using a gendered bathroom.

We hope that Fox viewers learned a valuable lesson this morning: Even if Varney “doesn’t like” gender neutral bathrooms, their existence has no negative impact on society. In fact, gender neutral bathrooms do a lot of good by making space for transgender American citizens in the public sphere – the same space that cis-gender Americans are already entitled to. Varney’s palpable discomfort and obsession with “change” is the entire right-wing movement in a nutshell, and we have to move past these narrow-minded bigots if our nation is going to develop further as a cohesive and unified society.

Marisa Manfredo
Marisa completed her undergraduate degree in 2013 at the University of Wisconsin with a double major in creative writing and media studies. She is an advocate of progressive policies and focuses her interests on gender equality and preventing sexual and domestic violence.
Latest Posts
Tags
bathrooms style trans Varney