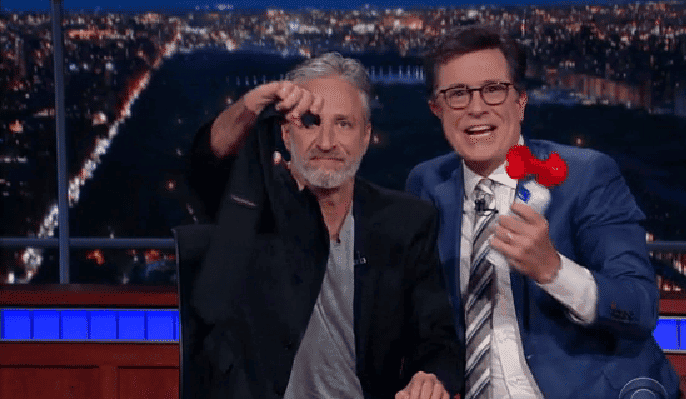 JUST IN: Trump Admits to Union-Busting At His Vegas Casino, Will Pay Settlement To Workers

Stephen Colbert brought back the legendary Jon Stewart last night to put Trump on blast right as he accepted the Republican nomination, and he didn’t disappoint.

He showed how for years, FOX News talking head Sean Hannity has been falsely attacking President Obama for certain qualities like narcissism and elitism and divisiveness, while giving Trump a complete and total pass on these exact same things.

While Hannity called Obama’s faith into question because of Reverend Wright, when the Pope criticized Donald Trump, Hannity was offended anyone would even dare to attack anyone’s faith.

And that’s when Stewart delivered this epic message:

“Either Lumpy and his friends are lying about being bothered by thin-skinned authoritarian less-than-Christian readers of prompter being president, or they don’t care, as long as it’s their thin-skinned prompter authoritarian tyrant narcissist. You just want that person to give you your country back because you feel that you’re this country’s rightful owners. The only problem with that, this country isn’t yours! You don’t own it! It never was! There is no real America! You don’t own it! You don’t own patriotism, you don’t own Christianity, you sure as hell don’t own respect for the brave and sacrifice of military, police and firefighters! Trust me!”

Watch it here (the action starts around the four minute mark):