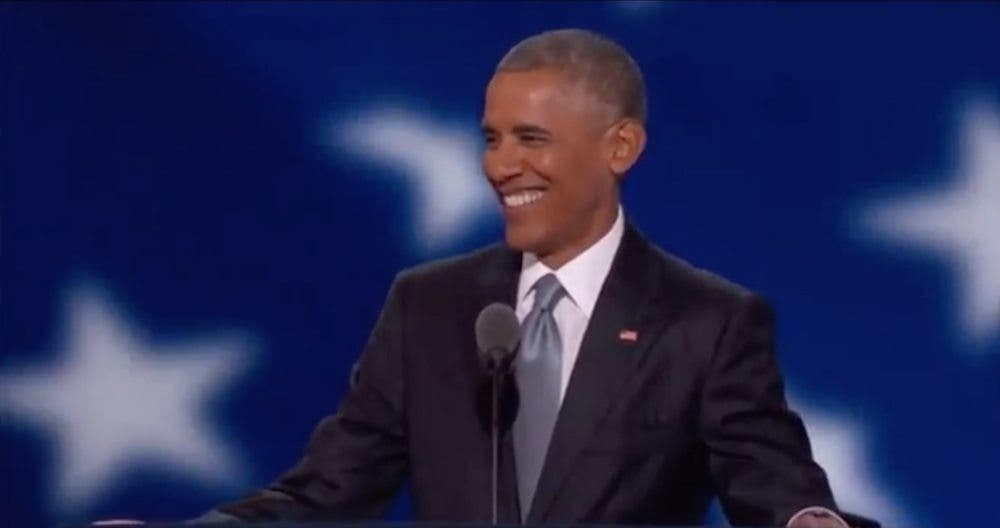 Obama’s valedictory speech as President at the DNC wasn’t just a Trump takedown, but a poignant message about America the brave, our country as it truly is, and how important it is to vote for the Democratic Party’s sane, competent candidate, Hillary Clinton in this year’s Presidential election. But the best part of his entire speech is in the video below, where President Obama explained to Trump that America doesn’t want a “strongman” and America isn’t a frightened place filled with fear, and certainly isn’t looking for a ruler. But that’s not all he told thousands of energized Democrats assembled in Philadelphia to listen to our nation’s first black President give a stirring testimonial about why we absolutely must elect Hillary Clinton as this nation’s first female president.

He calls himself a business guy, which is true. But I have to say I know plenty of business men and women who’ve achieved remarkable success without leaving a trail of lawsuits and unpaid workers and people who feel like they’ve gotten cheated.

Obama is right, too. Trump just lost a massive judgement for trying to screw one his painters in Miami, he even stiffed the creepy freedom kids with their authoritarian song about crushing enemies, who appeared at a Florida rally, and he even stood up to defend fired Fox News founder Roger Ailes’ blatant sexual discrimination. But Trump only respects those who have power and abuse it, and President Obama nailed him for his loving praise of the world’s worst dictators

[Trump] cozies up to Putin, praises Sadaam Hussein and tells our NATO allies that stood by our side after 9/11, that they’ve got to pay up if they want our protection. Well, America’s promises do not come with a price tag. We meet our commitments. We bear our burdens. That’s one of the reasons why almost every country on earth sees our country as stronger and more respected than eight years ago when I took office.

President Obama’s political career took off twelve years ago with an amazing speech at the Democratic National Convention, and tonight he gave a compelling testimonial about why it’s so important that we elect Hillary Clinton as the next President of the United States.