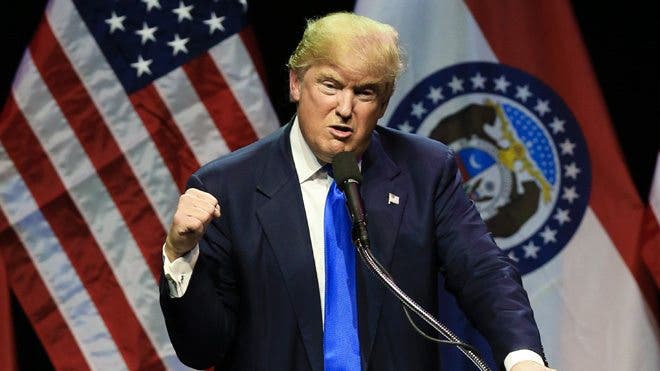 As we all know, Donald Trump is not fond of being mocked, as his constant assaults on press freedom and proposal for a dictatorial ban on press criticism shows. Unfortunately for the wannabe despot, speakers at the DNC have been hitting him hard all week long. His response to this unprecedented barrage of criticism is telling of not only his own vanity and insecurity but of his inability to be behave as a mature adult, a prerequisite for the presidency that no one had ever thought it necessary to mention before.

In response to the passionate, reasoned political pleas put forth by a diverse range of speakers at the DNC, the man that the Republican Party believes should lead our nation could respond only with bullying threats of physical violence. Speaking yesterday evening Trump said,

“I wanted to hit a couple of those speakers so hard. I would have hit them. No, no. I was going to hit them, I was all set and then I got a call from a highly respected governor.”

It is perhaps best to not even wonder what The Donald was “all set” to do, but the personal physical violence he is proposing against those who merely disagree with him politically is truly frightening. He seemed particularly offended by one speaker whom he termed only “a little guy,” (recalling all the times in his career that he screwed over the little guy?):

“I was gonna hit one guy in particular, a very little guy. I was gonna hit this guy so hard his head would spin and he wouldn’t know what the hell happened.”

Mr. Trump has of course repeatedly demonstrated his proclivity for physical violence, sometimes seemingly gratuitously but often as a means of intimidating his political opponents and those who protest at his rallies. The DNC, however, has offered the first example of the sort of measured but sustained criticism that he would inevitably endure as president and which is nothing compared to the barrage of delusional hatred Republicans have flung at both President Obama and Hillary Clinton. That he is so incredibly vain as to be unable to handle this for four days is shocking, and makes one wonder how he could possibly handle the pressures of the presidency without resorting to the dictatorial tendencies that clearly lurk not far below his toupeed surface.

James DeVinne
James DeVinne is a student at American University in Washington, DC majoring in International Service with a focus on the Middle East and South Asia. He is a founding member of Occupy Baltimore and interns at the Tahrir Institute for Middle East Policy.
Latest Posts
Tags
DNC style Trump violence