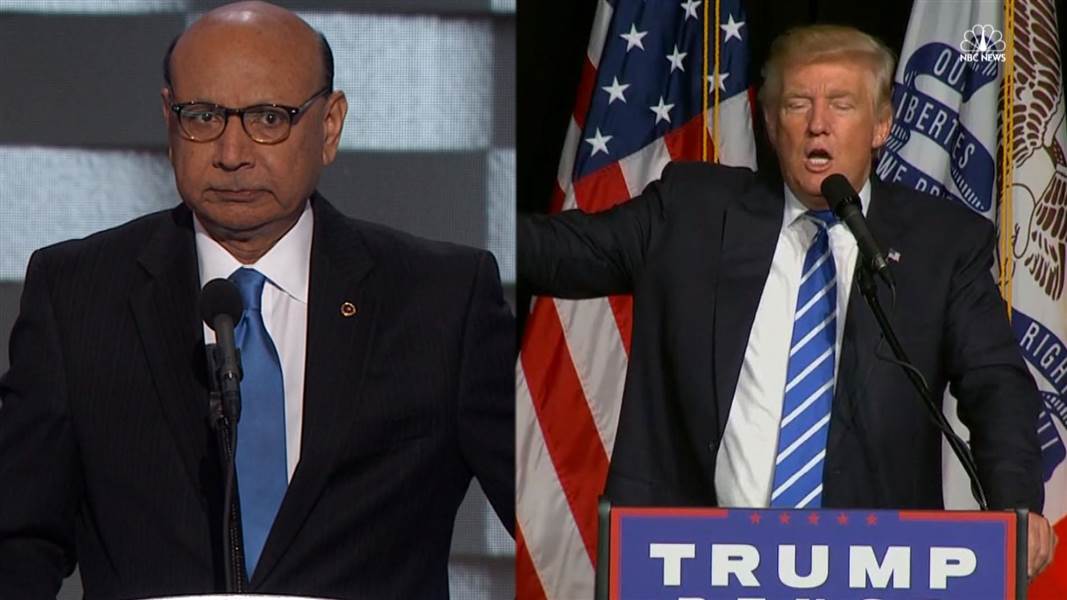 Donald Trump has proved to the country once again that he has the temperament of a child and the tact of a chainsaw, consistently behaving in a fashion most unbecoming an aspirant for the American presidency.

Grieving father Khizir Khan spoke at the Democratic Convention of his son’s sacrifice for his country. Captain Humayun Khan saved the lives of his unit when he bravely approached a suspicious vehicle alone at a checkpoint in Baquabah, Iraq – a vehicle which  then exploded.

Khan, who is a Muslim immigrant from the United Arab Emirates, shamed Trump for his bigoted rhetoric and his selfish disdain for the sacrifices of others. Trump’s proposed ban on Muslim immigrants would have blocked the Khans from entering our nation.

“Have you ever been to Arlington Cemetery?” Khan asked Trump. “Go look at the graves of brave patriots who died defending the United States of America. You will see all faiths, genders and ethnicities. You have sacrificed nothing and no one.”

Trump, incapable of letting anything go, responded to the comments today, where he insulted the father of a slain veteran while touring his own “achievements.”

He then went on to slander Khan’s wife, who did not speak at the Convention but told reporters she was overwhelmed with grief.

In a campaign full of appalling statements and flagrant lies, this might be the most heinous. Comparing the grudging creation of jobs to serving his country in combat overseas – an opportunity which Trump had, but cowardly refused– and the unimaginable pain of losing a son is just an unforgivable insult to the men and women who risk their lives to protect our nation.

Trump’s “jobs” are notoriously low-paying, and he goes out of his way to not pay his workers at all – or to import foreign guest workers, so he can pay them even less. Trump only forces others to sacrifice for him, and he will make no sacrifices for the well-being of this country.