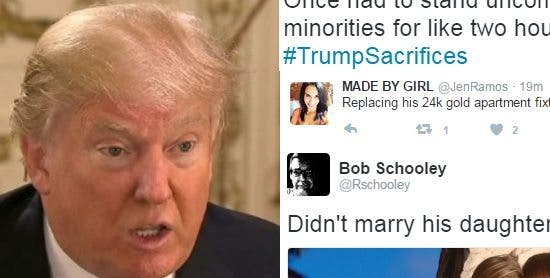 In an interview set to air tomorrow, Republican nominee Donald Trump made the unconscionable decision to slander the family of a fallen Muslim veteran and to denigrate the life that their son gave in the service of his country. In Trump’s mind, it somehow makes sense that a life lost defending the American people is equivalent to Trump “creating thousands of jobs.”

The utter absurdity and inanity of his statement was not lost on the denizens of Twitter, who promptly began tossing back and forth ideas of what hardships that silver-spoon fed Donald Trump has endured and what heart-wrenching sacrifices that the billionaire tycoon has made in his life.

The results are hilarious.

#TrumpSacrifices Had to outsource “wife” position to foreign models since most of the time domestic ones wouldn’t date him.

Once survived an entire weekend at Mar-a-Lago with just one can of hairspray. #TrumpSacrifices

Once had to take on a second job in PR just to make ends meet. #TrumpSacrifices pic.twitter.com/2s7C8dU84m

#TrumpSacrifices Didn’t name all of his kids “Donald.”

#TrumpSacrifices Has to wait for horses to die before harvesting their hair for his comb over.

#TrumpSacrifices
Sometimes, he has to buy gloves that are child-sized so they fit his tiny baby hands. pic.twitter.com/V7gEvpaZ3K

Had to settle for green and not gold houseplants. #TrumpSacrifices pic.twitter.com/8RRflTGswa

Instead of spending money on cosmetic surgery for his tiny T-Rex hands, he paid for Melania’s speech-writing class. #TrumpSacrifices

Wore a suit and tie, not a robe and hood to the RNC. #TrumpSacrifices