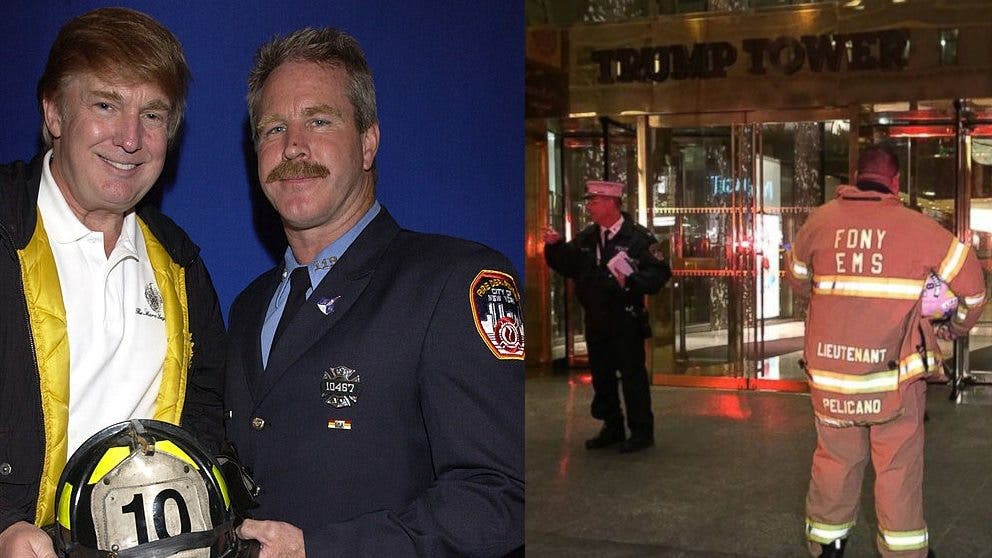 Last night Donald Trump got rescued from a stuck elevator inside a Wyndham Hotel by the Colorado Springs Fire Department before one of his hate rallies. Naturally, when the fire department rescued the short-fingered friend of Putin, along with nine others, they were just doing their jobs.

Though he was only able to attend the rally with fire  assistance beforehand, Donald Trump proceeded to publicly criticize the Colorado Springs Fire Marshal for doing his job and ensuring that the Republican’s presidential campaign rally in the deeply conservative home to Peterson Air Force base and the Air Force academy was safe for all of the participants and the speaker. For his service to public health and safety as Fire Marshal, the Republican candidate for President openly insulted his job performance in front of an overflow crowd, even suggesting that he was a Clinton supporter, because he did his job to keep Trump supporters safe from event organizers who handed out too many tickets:

Trump even turned to insulting the local fire marshal, Brett Lacey, by claiming that Lacey wasn’t letting more of the crowd into a gymnasium at the University of Colorado, Colorado Springs, because he supported Clinton’s candidacy. “We have thousands of beautiful, wonderful, great people outside, and we have in the room next door over a thousand people,” Trump said. “They won’t let them in. And the reason they won’t let them in is because they don’t know what the hell they’re doing.”

He added, “Hey, maybe they’re a Hillary person. Could that be possible? Probably. I don’t think there are too many of them.” Lacey, for his part, in an interview with CBS affiliate KKTV took the high road.

“There’s an old adage that when a fire marshal walks into a room, milk curdles,” said Lacey. “So because we’re always looking out for public safety and trying to make certain venues go off successfully and safely, sometimes there are people that aren’t very happy with some of the rules and regulations we’re required to enforce. But it doesn’t bother me at all.”

At least Colorado Springs Fire and EMS kept the rally participants Donald Trump hasn’t sanctioned from attending, like the journalists from the Washington Post, Politico, The Daily Beast and The Huffington Post in a manner unheard of by a public office seeker in a national campaign.

Just last week, Trump casually committed a massive violation of the First Amendment, when after expelling a Washington Post journalist, his security staffers called the local police who proceeded to stop the reporter, to search and to seize his phone too, all to keep him from covering a Mike Pence rally.

Let’s be clear, the illegal detention and searches also violated the reporter’s Fourth Amendment rights too. It’s hard to imagine why Trump needed to keep reporters out of Pence’s rally, since his only contribution to the campaign besides chiding his red-faced running mate’s personal attacks has been the call flood his detractors started after he passed a ridiculous “war on women” bill criminalizing ladies reproductive cycles, entitled Periods for Pence.

Earlier this year, Colorado Fire Marshal Lacey was recognized as Civilian of the Year by his fire department, reports say for his response to the Planned Parenthood mass shooting which claimed the lives of a police officer, two other citizens and caused five other officers to be injured and four other passers by too.

If there’s one thing we know about the ‘red states’ who support Republicans and their Dear Leader Donald Trump, their political party’s dim view of public service is only exceeded by their dependence on public assistance. Meanwhile, the contemptible Republican presidential candidate, just proved that he’s not only in tune with those red state voters, but he doesn’t care about public safety, and is filled with contempt for the very firefighters whose public service are the backbone of America’s first responder networks too.

“Making America Safe Again” fits on a signboard, but what does it really mean when a presidential candidate openly mocks, criticizes and “other”-izes the very Americans upon whom he depends for his own safety.

Watch Donald Trump blast the Fire Marshal over safety and overcrowding at his event in Colorado. pic.twitter.com/uTfzxs2Iri