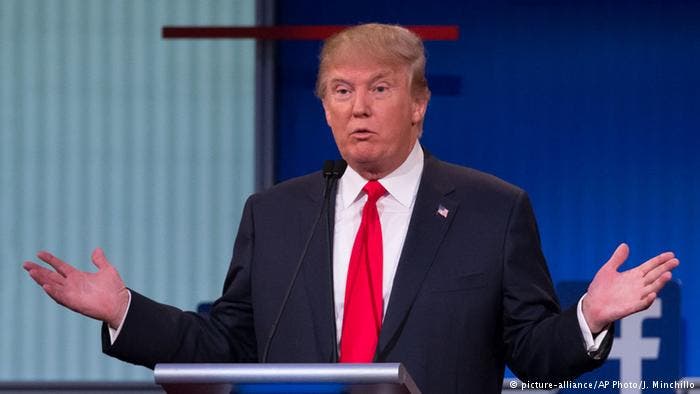 Donald Trump is many things to many people, but no rational person could ever believe that he has a single clue about foreign policy. This weekend, in an ABC News interview, Trump yet again proved that he is an ignoramus by claiming that if he was President, he would not allow Russia to enter Ukraine. (An odd statement since Putin dispatched his country’s armed forces to annex the Crimean peninsula and inflame a civil war over two years ago.)

George Stephanopoulos instant fact-checked Trump with his follow up, ‘Well, he’s already there, isn’t he?” America’s authoritarian Presidential candidate replied, “OK, well, he’s there in a certain way, but I’m not there yet.”

Trump’s presidential campaign has failed to develop actual foreign policies.  It’s a great big world out there, but Trump lacks a coherent policy statement on virtually every substantial issue ranging from Cuba, to Iran, to North Korea. There is only one notable exception: Eastern Europe. Republicans weakened their platform’s Ukraine position at the candidate’s request (the sole change requested).

Trump himself recently repudiated NATO publicly, sending shockwaves of panic through states bordering Russia who are allied with America. He supports a dubious annexation “vote” conducted in the Crimea at gunpoint.

Republican nominee Donald Trump began his attempts to woo Putin, when he hired pro-Kremlin advisor Paul Manafort who revived the career of Viktor Yanukovych, the Ukrainian kleptocrat. Yanukovych’s Presidency ended in bloodshed when he absconded to Russia in the midst of a popular uprising and called for a civil war. Even now, nobody knows if Manafort is still under contract to work in Ukraine, casting a dark shadow on Trump’s adjustments to the Republican platform.

Within days the Republican nominee’s bromance with Vladimir Putin went from speculation to Trump blatantly begging for Russian support in a press conference (which they did, hacking the Clinton campaign a day later). Trump’s detractors were left feeling vindicated in their criticism of his sinisterly ignorant foreign policy.

“When Putin goes out and tells everybody — and you talk about a relationship, but he says Donald Trump is going to win and Donald Trump is a genius, and then I have people saying you should disavow. I said, I’m going to disavow that?”

On the other side of the fence, Putin hates Democratic nominee Hillary Clinton. As Secretary of State, she called out the Russian autocrat’s completely rigged 2011 election that led enraged Russians to risk their lives protesting in the streets.

Republicans have been forced to pin all their hopes in this year’s election on a platform of 19th century economic isolationism, nativism and divisive fear.