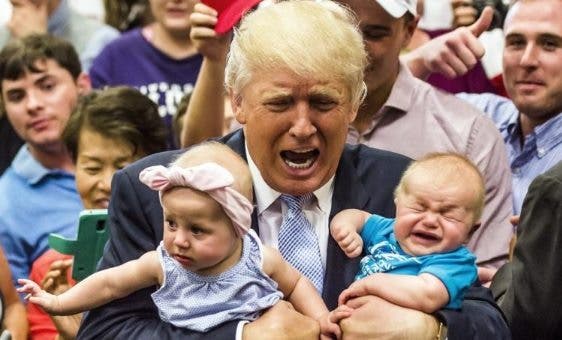 Donald Trump showed his true colors once again, kicking out a baby from one of his speaking appearances right in front of the news media. Politicians kissing babies isn’t just a cliche, but an actual thing on the campaign trail in American politics. Unfortunately, babies are responding with as much discontent to Trump as most of sane America, like the poor child kissed by the orange-faced scoundrel in Colorado who wouldn’t stop crying in his arms, right after he was rescued from an elevator and insulted the very firemen whose help he needed to make it to that rally.

Today, Trump kept his fight going with babies around America in spectacular fashion. CBS News had front row seats for the shocking exchange between the Republican Party’s standard-bearer and security after a baby in the audience wouldn’t stop crying – a sound the four time father is obviously unfamiliar with.

In typical fashion for the callous Republican nominee for President, after the baby started to cry, Trump exclaimed how much he loved babies, how beautiful the baby was and how it was “young and beautiful and healthy and that’s what we want.”

But when the baby started crying again, that’s when Trump lost it and kicked the infant out. This is the state of Republican family values, patience and common sense in a general election where pundits say that ‘the rules don’t apply.’

Trump needs ever bigger lies and low behaviors, so politicizing babies, turning around and making self-congratulatory remarks like, “I think she really believed me that I love having a baby crying while I’m speaking,” is just the next logical spectacle on the Republican race to the bottom, to insult or degrade every possible American regardless of race, age, religion or credo in this year’s general election.