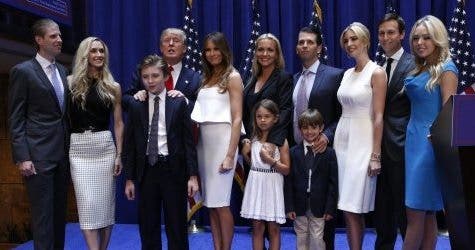 The Republican candidate who brags about being a “feminist” for being magnanimous enough to hire young and exceptionally attractive women in the private sector, could not name a single woman for a Cabinet level position – except, inevitably, his daughter Ivanka.

It’s common knowledge that Donald Trump has a very peculiar affection for his daughter Ivanka. From the way he expresses his desire to date her, to the creepy photoshoots they take together, to the way he stiffly embraced his wife Melania by her arms, but went from high to low with Ivanka, as the 70-year old real estate mogul grabbed her shoulders, then patted her arms and slid both of his hands smoothly and purposefully onto his daughter’s hips as she gently placed one hand on his right shoulder and another in a faux hug on his left side.

That’s when Trump tapped Ivanka’s hips in the rapid fashion you’d expect a yuppie to use as his pickup move at a dark singles bar in Soho, and not from a Presidential candidate on live national television at Cleveland’s RNC. It’s a moment that he will never live down, not unlike the time that Trump nervously asked strangers at the 1997 Miss Teen USA pageant if “his daughter was hot” when she was only 16-years old, according to a New York Times report.

But the women, voters and pundits who laughed Mitt Romney clear out of the 2012 election after his awkward “binders full of women” comment will probably be furious that four years later, the Republican nominee for President has done even less homework. That’s Trump’s style though – to double or triple down on the mistakes of his party’s past, and drop a massive dose of nepotism on top for good measure.

It’s just one more reason why 7 in 10 women view the Republican candidate for President negatively, since April of this year according to Gallup. Trump’s misogyny is cemented by his inability to name a single woman he would appoint for his cabinet except for his daughter, who, like her father, is assuredly unqualified for the position.

Add your name to call on prosecutors to ARREST DONALD TRUMP for his crimes!Advertisements
Tags
ivanka style Trump