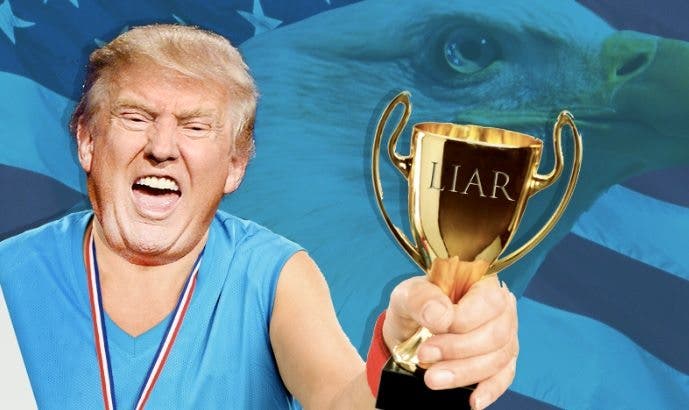 Donald Trump’s greatest lies in summer re-runs debuted in Michigan today, where he brought up long-debunked theories and flat-out fabrications on a wide range of issues, from the need to repeal the estate tax (doing so would raise the federal debt by $11 trillion) to how high unemployment rates are (actually at all-time lows under the Obama administration), taxes (are far too low on the wealthy), repealing regulations (regulations actually fuel growth and protect the economy), and Obamacare (still works, but Trump lies about it) were on the script today.

After the Trump Campaign’s two most disastrous weeks in the 2016 general election, Republicans spent last week imploring their terminally uninformed candidate to hit the reset button on his campaign and to please endorse the top GOP officeholder in Congress. But the army of yes-men and the uncritical fame Donald Trump amassed from his reality TV stardom has effectively robbed the Republican candidate of the ability or even need to get introspective, leaving his candidacy mired in a veil of ignorance and swaddled in bigotry.

Ten months too late, the mainstream media is finally beginning to treat Trump’s campaign with the scrutiny it deserves, as personalities from all levels seek redemption for handing the Trump camp a free $2 billion dollar media buy by showing new fact checks in real time, and using the lower third of the TV screen when he speaks to present the objective truth in case anyone is gullible enough to take Trump’s myths and delusions at face-value.

Now, Trump’s old nemesis – the fact checkers at the Washington Post – are tuning in and are steadily ripping the orange veneer off of Trump’s candidacy, like when he tried to read a “big” economic speech off of a tele-prompter today. The entire team took to Twitter to debunk Trump’s economic “agenda,” eviscerating his post-knowledge campaign and correcting the record of Trump’s incessant stream of outrageous misrepresentations and obvious lies.

False, Clinton didn't say she wanted to raise taxes on the middle class. This is pathetic, even embarrassing spin. https://t.co/X0AlkWUWL5

Has @realDonaldTrump heard about the retirement of the babyboom generation? Big factor in labor participation rate https://t.co/FBBmZb4JdD

We exposed the falsity of the 2 million job ACA claim more than two years ago — how does this live on? https://t.co/yysBGDFFtD

be wary of these estimates of regulatory costs. https://t.co/NJ0EOTEEIc

The "death tax" …everything you need to know. https://t.co/1LFEsMb64J

be wary of claims about job losses from the Korea free trade deal https://t.co/YpdNiemrDR

Add your name to call on prosecutors to ARREST DONALD TRUMP for his crimes!Advertisements
Tags
fact check style washington post