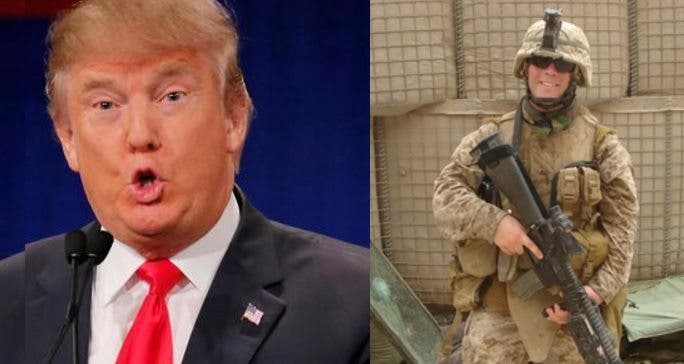 Marine veteran Sean Barney, who received a Purple Heart after being severely wounded by an enemy sniper in Iraq, has published a CNN op-ed about Republican nominee Donald Trump’s comments about ‘receiving’ a copy of a veterans Purple Heart last week. He tears into Trump for trivializing the immense sacrifice that Purple Heart recipients make in their efforts to keep America safe and free.

When a veteran Trump supporter gave Trump a replica of his invaluable medal, all Trump had to say was, “I always wanted to get the Purple Heart. This was much easier.” One of Barney’s fellow Marine veterans said to Barney, “Does he understand that many Marines have gotten their Purple Hearts at their funerals? Wonder if he would still want one.”

The Purple Heart incident came only days after Trump repeatedly disrespected the Khans, a Gold Star Family who lost their only child in Iraq. Barney writes,

“Khizr Khan made the point at the Democratic Convention that the Khans, immigrants who would have been denied entry to the United States if a policy like the one Trump proposes had been in place, had sacrificed more for their adopted country than Trump ever has. The Khans lost their son, Capt. Humayun Khan, in 2004 when, acting to protect his fellow soldiers, he was killed by a car bomb in Iraq.”

Barney makes a compelling case that Trump is in no way qualified to be Commander in Chief of the U.S. Armed Forces. For all his rhetoric, Trump time and again refuses to treat our veterans with the respect owed to them. He deliberately avoids facing the uncomfortable facts about the immense sacrifices veterans make every day. We need a President who makes military decisions with national security and our brave service men and women in mind – not a President who makes up his mind based on money, without regard for the human cost of his decisions.

Here is an excerpt of Barney’s op-ed:

Last Tuesday, a veteran supporter handed Donald Trump a Purple Heart medal. Trump’s flippant response: “I always wanted to get the Purple Heart. This was much easier.” As a veteran, I was quite simply astonished.