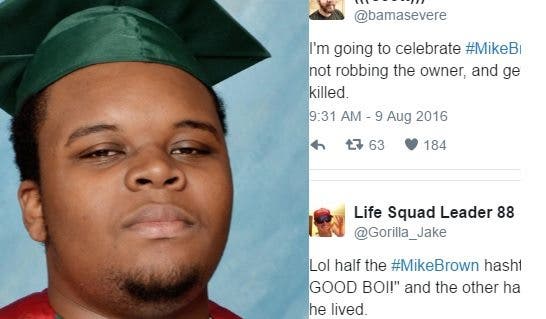 Today is the second anniversary of citizen Mike Brown’s death, after he was summarily executed in Ferguson, Missouri at the hands of officer Darren Wilson.

Brown’s death was the catalyst which galvanized the Black Lives Matter (BLM) movement into a full-fledged national organization. Racists cower in fear of BLM, as they now see a movement has risen in direct opposition, and as a direct cause, of their hatred. After hundreds of protests across the nation, BLM has shown themselves to be a force with which to be reckoned with, who will not be silenced through fear and intimidation.

While organizations like FOX “News” decry BLM as a terrorist organization, it is clear the rhetoric used to describe the movement is merely an attempt to continue to dehumanize and villainize thousands of individuals who are making reasonable demands for justice and equal treatment under the law. As Brown’s death holds such a symbolic importance to BLM, racists have decided to mark his passing by taking to Twitter to celebrate his murder.

The disgusting and vile tweets found under the hashtag #MikeBrown should sicken any individual with a conscience, which all of these sociopathic individuals are clearly missing. It’s not just that the Twittersphere of racism and bigotry is on display, but that they are so open about their revolting pleasure in Brown’s death. Is racism dead in America? Not even close.

Behold a small sampling of the unparalleled ugliness below:

Hey #BlackLivesMatter negros your 2 year anniversary of the crime nigger Mike Brown is coming up time for a new flat screen.

I’m going to celebrate #MikeBrown today, by going to the store, not robbing the owner, and getting home safely without being killed.

Lol half the #MikeBrown hashtag is “HE DINDU NUFFIN! HE A GOOD BOI!” and the other half is actual reality that he died how he lived.

Get better martyrs. #MikeBrown? Criminal scum who assaulted a store owner & tried to kill a cop. #BlackLivesMatter is USING you suckers.

In America, we protect the weak, the innocent, the small. We don’t celebrate #MikeBrown and the violent opportunists, or their media flock.

Gentle Giant?Cut the crap #MikeBrown was a criminal who tried to kill a cop and the cop won! Justice if you ask me! pic.twitter.com/Edl1o7GnNP

LMAO! Had #MikeBrown not been a drug addicted violent gang banger he could have played football! #LifeIsChoices https://t.co/pNAwuVPxls

#DemsInPhilly #DNCinPHL #MikeBrown was a violent thug, and the patron saint of the Democratic Party.https://t.co/2EUZOhVvRZ

Lou Colagiovanni
Lou Colagiovanni is an investigative journalist living in Las Vegas who specializes in politics and crime. His work has been highlighted all over the world and he is regularly featured on television and radio.
Latest Posts
Tags
BLM mike brown style