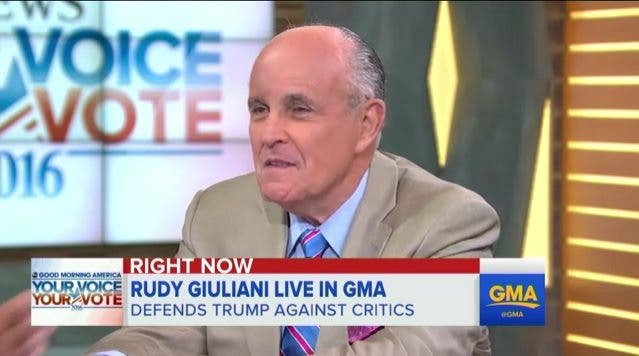 Former New York Mayor turned professional Islamophobe, Rudy Giuliani, attempted to clarify Donald Trump’s calls for violence in the event of a Hillary Clinton presidency. He didn’t present a very imaginative defense, however, and his comments are just as – if not even more – disturbing than Trump’s. On today’s Good Morning America, Giuliani insisted that Trump would have made a death threat if he was really calling for a death threat, and you can tell he didn’t because nobody cheered.

“We know Donald Trump is not particularly indirect. If Donald Trump was going to say something like that, he’d say something like that. You know how speeches go. He was talking about how they [gun rights advocates] have the power to keep her out of office. That’s what he was talking about. With a crowd like that, if that’s what they thought he’d meant, they’d have gone wild. To buy that, you have to be corrupt because if you said that to me, I would say to you: ‘Are you out of your mind?’”

They don’t know Donald Trump the way I do. I’ve known him for 28 years. I know he is a responsible man, a very, very successful man, a man who achieved a great deal and can be trusted much better than Hillary Clinton, who has been found to be extremely careless with the use of national security information.”

Please, Mr. Giuliani. How stupid do you think we are? Trump and his crowd of alt-right proto-fascists are not going to be able to shrug this one aside. This is a clear dog-whistle appeal to violence known as sochastic terrorism – “to incite random actors to carry out violent or terrorist acts that are statistically predictable but individually unpredictable” – directed towards a heavily armed community that is known for not only extremist views but for carrying out violence. The right-wing media spends the vast majority of its time demonizing Secretary Clinton, calling her traitor, liar, killer. Cries of “Hang that bitch!” regularly echo at Trump rallies. Trump’s statements are the subliminal justification that a disturbed white man with a legally purchased assault rifle has been waiting to hear. We all know what he said.

This is not okay, and we cannot allow the right-wing to just brush this under the rug or dismiss it as a joke.