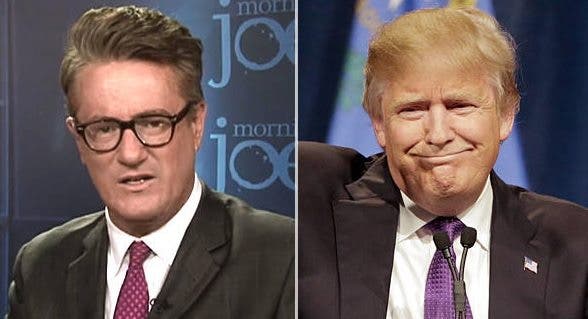 It appears the budding romance between Republican presidential nominee Donald Trump and MSNBC host Joe Scarborough has finally come to an end. The host of Morning Joe penned a scathing open letter calling for Trump to drop out of the presidential race. There is no word on who is going to keep their commemorative beer can collection once the separation has been finalized.

Scarborough’s descent from avid Trump supporter has come fast and hard. It wasn’t so long ago, in April, Scarborough compared the putrid faux-billionaire to late rock legend Prince. Scarborough said, “He’s so flexible, he’s like Prince, a shape-shifter.” Then two months later a feud was on between Trump and host of MSNBC’s “Morning Joe.” While still friends, the cracks in the veneer were apparent for all to see:

Nobody is watching @Morning_Joe anymore. Gone off the deep end – bad ratings. You won’t believe what I am watching now!

You’re biased because by your own standards, you’re not a real American. Your mother was a foreigner. https://t.co/333coGlYb7

In the aftermath of the public jockeying, Scarborough took off the gloves after Trump called on his supporters to use violence against Hillary Clinton and shared a scathing letter imploring Republican officials to remove Donald Trump as their presidential nominee. Scarborough wrote, “A bloody line has been crossed that cannot be ignored. At long last, Donald Trump has left the Republican Party few options but to act decisively and get this political train wreck off the tracks before something terrible happens.”

Scarborough listed some of Trump’s worst moments on the campaign trail.

“The Muslim ban, the David Duke denial, the “Mexican” judge flap, the draft dodger denigrating John McCain’s military service, the son of privilege attacking an immigrant Gold Star mother and the constant revisionism and lying about past political positions taken are but a few of the lowlights that have punctuated Donald Trump’s chaotic chase for the presidency.”

He then laid out his advice for the Republican leadership to fill the void Trump will leave if he is forced to exit the race:

We are in uncharted waters but that does not mean that the way forward is not clear. It is.

Will the two ever make-up like a happy ending to a Hallmark movie? Likely not, the bridge has been burned by Scarborough and Trump is not one to forgive a server who forgets his finger bowl at the dinner table to wash his tiny hands, let alone a public figure who lambastes him in the media. Will Scarborough’s words do any damage to Trump? On their own it is doubtful, but Scarborough has joined with hundreds of other powerful Republicans in public life. Any contribution to Trump’s downfall is welcome, and while it took Scarborough some time to come around there is no shame in one admitting they were wrong and changing course even if it is late in the game.