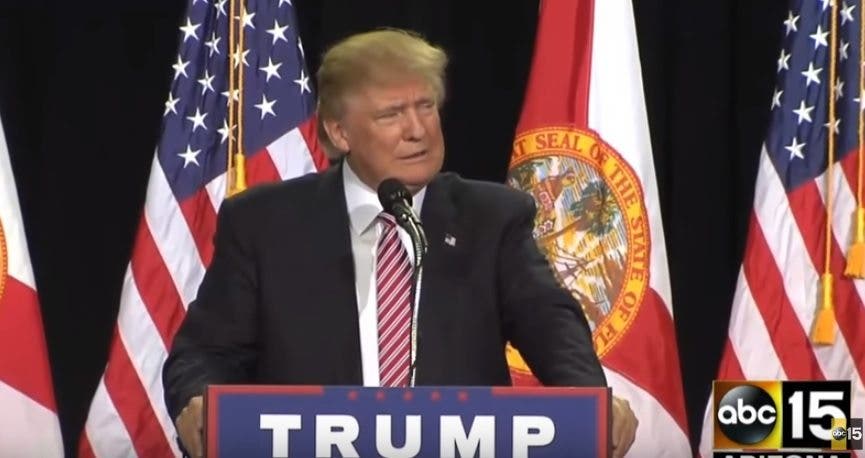 Last night the unthinkable happened: Republican nominee Donald Trump was rendered speechless. At his Florida rally, a protester interrupted him by shouting “You love Russia!” and “You’re Putin’s b*tch!” He was immediately ejected, but his words seemed to have a lasting impact. Trump appeared flummoxed for a full one minute and twenty seconds, remaining mostly silent with a few incoherent remarks and an impromptu bout of offbeat clapping.

The protester had touched a nerve. Ties between the Russian Federation and the Trump campaign have been the object of intense speculation in recent weeks after Russian hackers infiltrated the Democratic National Convention’s servers (DNC) and released anti-Clinton documents through WikiLeaks. Following this fortuitous turn of events for the Trump campaign, Trump asked Russia to hack and release Democratic nominee Hillary Clinton’s 30,000 personal emails, which they did.

Trump also has an extensive history of publicly admiring “Russian President” Vladimir Putin’s authoritarian tactics to suppress dissent, to control the press with an iron grip, and the frequent murder of journalists. His campaign manager, Paul Manafort, propped up disgraced Ukrainian autocrat Viktor Yanukovich, who was granted asylum in Russia by Putin after he was ousted by the Ukrainian Maidan Revolution in 2014.

The most likely scenario is that the Kremlin is actively helping Trump while Trump himself is unconnected to the espionage. Russia certainly has a lot to gain from a Trump election. Putin is adamantly opposed to Hillary Clinton who he blames for inciting pro-democracy protests during her tenure as Secretary of State. Trump also appears uncommitted to NATO, the security pact that restrains Russia’s militaristic expansionism in eastern Europe.

All things considered, it is understandable why Trump had nothing to say after he was accused of loving Russia and being Putin’s lapdog. He surely had no idea where to begin in the myriad of suspicious connections, each less defensible than the next. So Trump did what he does best – looking goofy and saying nothing of substance.