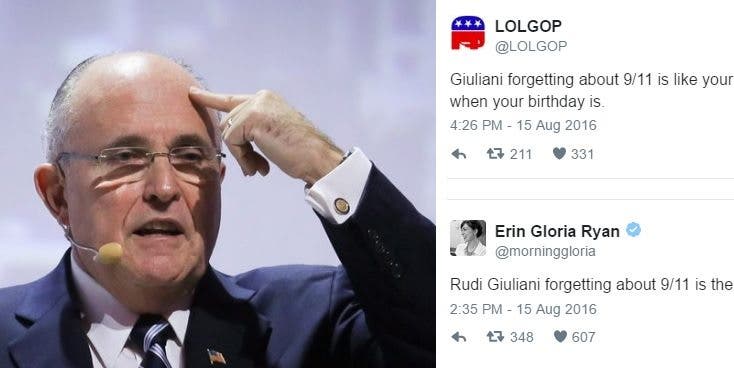 The Mayor of 9/11, Rudy Giuliani, somehow forgot that the September 11th, 2001, terrorist attacks occurred in his city, on his watch while introducing Donald Trump today at a rally in Youngstown, Ohio.

In a deeply offensive and outrageous attempt to smear President Barack Obama, Giuliani declared that no terrorist attacks had occurred in the United States before Obama took office, somehow ignoring the fact that he’s been exploiting the deaths of 3,000 Americans to further his own political agenda for a decade – to the point that Joe Biden once quipped that all Giuliani ever said was “a noun, a verb, and 9/11.”

The internet, of course, had a field day with his mind-boggling remarks.

All Giuliani has now is a noun and a verb. Thanks Obama. https://t.co/PK7iOr9sUX

Giuliani forgetting about 9/11 is like your mom calling to ask when your birthday is.

Rudi Giuliani forgetting about 9/11 is the 9/11 of never forgetting.

I’ll always remember where I was the one and only time Giuliani didn’t talk about 9/11. https://t.co/CTjdiohLAy

GIULIANI: there hasnt been a single terrorist attack until obama came along
REPORTER: what about 9/11
GIULIANI: who that? never heard of him

Rudy Giuliani would seem to be brain-dead yet still speaking. How is this possible?

Someone get a plunger i can’t flush my Rudy Giuliani

#MyIdeaOfAHero is Rudy Giuliani, because he reminded all Americans to never forget 9/11 and today forgot 9/11

Donald Trump and Rudy Giuliani seem to be having a contest to see who’s more unstable and full of sh*t.
My poll has them tied…

Bush’s adminstration brainwashed Rudy Giuliani to make him forget about 9/11. That’s the only explanation

Add your name to call on prosecutors to ARREST DONALD TRUMP for his crimes!Advertisements
Tags
giuliani style Trump