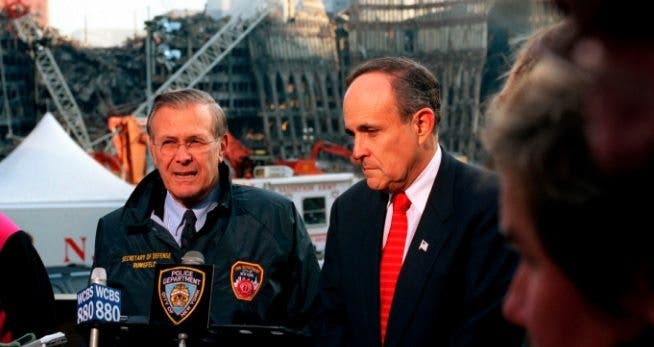 The Trump campaign and their camp-followers have been attempting some spectacular feats of historical revisionism over the past few weeks. From saying that the President Obama was the founder of Daesh (ISIS/ISIL) to blaming him for beginning both the wars in Iraq and Afghanistan (which were George W. Bush’s doing), Trump and his surrogates have been rewriting the truth with a disturbing frequency and severity.

But nothing has been quite as shocking as hearing former New York Mayor Rudy Giuliani forget that the terrorist attacks of September 11th, 2001 ever happened.

While introducing Trump at a speech today, Giuliani said that “By the way, under those eight years before Obama came along, we didn’t have any successful radical Islamic terrorist attack in the United States. They all started when Clinton and Obama got into office.”

Not only is this an outrageous rewriting of history to suit today’s narrative, it is a show of enormous hypocrisy from Giuliani, who up to this point has invoked the 9/11 attacks – which killed 2,600 people in his city on his watch – as his qualification for everything, including a failed run for the presidency. He spoke about 9/11 so often that satirical newspaper the Onion ran a headline entitled Giuliani To Run For President Of 9/11.

It just goes to show that when it comes to slandering President Obama, nothing is sacred. The intensity of the fantasy world which the Trump campaign resides in is just unfathomable. To hear a man who based his entire political career exploiting the worst terrorist attack in our nation’s history suddenly forget it ever happened for a few cheap political points is the height of shame.

Video of Rudy saying we didn’t “have any successful radical Islamic terrorist attacks in the U.S.” before Obama: pic.twitter.com/3tC1InfZj0

Add your name to call on prosecutors to ARREST DONALD TRUMP for his crimes!Advertisements
Tags
9/11 Rudy Giuliani style