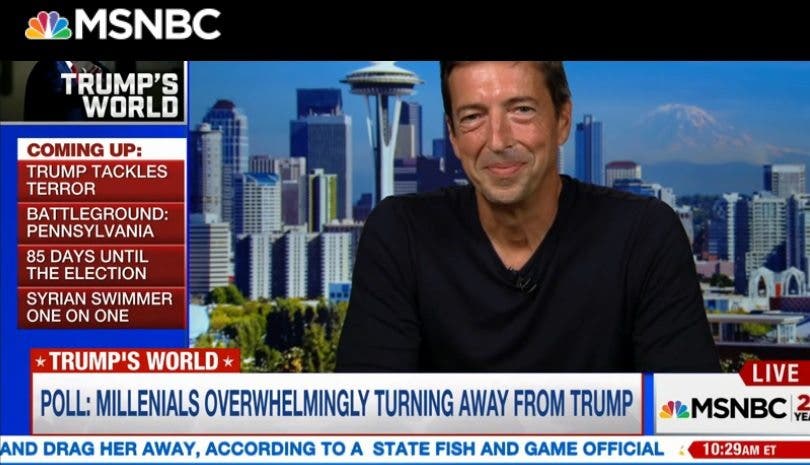 President Ronald Reagan’s son Ron Reagan, who is an author and political analyst, used an interview today to absolutely eviscerate Donald Trump’s candidacy by telling a truth too many in the mainstream media are afraid to repeat.

While on MSNBC, Reagan was asked about Mike Pence’s ridiculous comparison of Trump to his father, who has posthumously been elevated to the status of minor deity by the modern Republican Party.

Reagan the Younger left no room for misinterpretation in his brutal condemnation of Donald Trump: “Well one thing he left out, I suppose, is my father wasn’t pathological. My father would have been humiliated and embarrassed by what has happened to his party. The Republican party. And be humiliated and embarrassed that they have nominated somebody like Donald Trump to be president of the United States.”

Reagan left no stone unturned when it came to dissection of the Republican nominee, saying “We can talk about his foreign policy address coming up, we can talk about anything you want to about the Trump campaign. The fact of the matter is Trump should not be in this race. He is an absurdity, he is a travesty and that is the reality here. I know it is difficult for journalists, television journalists or even print journalists, to deal with this. We are used to covering presidential races where we grant credibility to both sides, but that is not the case this time.”

The former president’s son has no faith in Trump’s disastrous carnival of a campaign, and who with the ability to think critically would disagree with him?

Trump has shown time and again he knows nothing about policy, either foreign or domestic, but would much rather just blurt out whatever he was thinking at the time.

Reagan said, “We have a candidate on one side, Hillary Clinton, whatever you may think of her, whatever you may think of her policy prescriptions, is a credible candidate. Donald Trump is not. I had the dubious pleasure of reading the transcript of his speech today. It is full of the usual empty jargon. This is a man who knows nothing about the world and cannot be President of the United States. That amounts to a national emergency.”

The conversation shifted to polling and MSNBC’s host asked Reagan about his thoughts on polls which show Hillary Clinton leading Donald Trump by 35 points among individuals under 35-years-old. The host went on to say that Trump only has 20 percent of the youth vote, which is the “worst showing since they started taking the poll. Even worse than Richard Nixon’s 36 percent in 1972.”

When Trump is losing to Nixon in terms of image, the American public should stop and pay attention. The host continued, “What do you expect to see, you’ve been around politics your whole life, do you think a lot more Republicans particularly running in those down-ballot races just completely separate themselves from Donald Trump?”

To which Reagan quipped, “Yes. I wouldn’t be surprised at all, and we’ve already heard reports that the RNC is planning to pull funding from the Trump campaign and funnel it instead to the senate races and the congressional races. I would look for that to happen, yes.”

Reagan continued to thumb his nose at Trump, saying “Again, this is an untenable candidate. The tragedy here for the Republican Party, and I guess you could say for the political system as a whole. We have a two-party system in our country. You could argue that maybe we should have a multi-party system and maybe that is what will happen in the end now. But the two party system as we’ve known it for a long, long time now is effectively dead. The Republican Party does not exist, will not exist going forward, as it has in decades past.”

Reagan finished with a brutal analysis of the Republican Party, focusing on how their constituency has followed their politicians into the abyss of radicalism.


Add your name to call on prosecutors to ARREST DONALD TRUMP for his crimes!Advertisements
Tags
Reagan style Trump