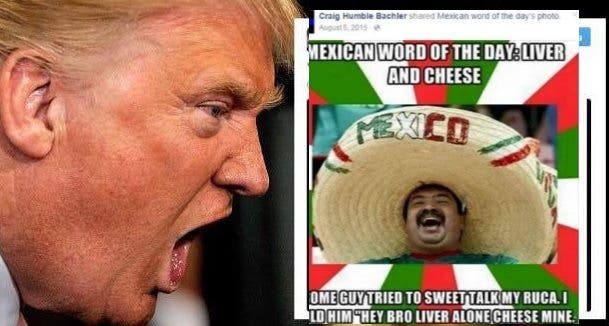 The Associated Press (AP) has reported that after a thorough investigation into the social media accounts of both Trump and Clinton campaign staffers, and 19,000 hacked Democratic National Convention (DNC) emails, the Donald Trump campaign internally embraces the racism they wear on their sleeve. You might want to sit down for this, but at least seven members of the Trump campaign staff regularly post racist, religiously intolerant, or Islamophobic content on their personal social media accounts.

The hateful posts range from memes to hard right “interpretations” of news. Craig Bachelor, the statewide director of coalitions for Florida, posted jokes about Mexican accents with an overweight man wearing a sombrero in the background. Mark Kevin Lloyd, the field director of Virginia, shared a meme in the wake of the Orlando Pulse nightclub attack declaring that a person who refuses to eat bacon should not be allowed to purchase firearms (an attack on Muslims, who abstain from pork for religious reasons).

Lloyd’s Islamophobia was already evident prior to the Orlando shooting. He had previously posted that Islam is “a barbaric cult.” The grassroots organizer Annie Mari Delgado was horrified by the a Muslim-American judge being appointed in 2015. (The liberal judge was sworn in on the Qur’an.) Delgado was certain that Judge Carolyn Walker-Diallo was determined to impose “sharia” law on America. She wrote, “Step by step… this is how American culture will end.”

“Sharia law” actually refers to a body of Koranic guidance towards living an Islamic life; it is not a substitute for civil law. “sharia is not a book of statutes or judicial precedent imposed by a government, and it’s not a set of regulations adjudicated in court.” The “sharia law” that Republicans are

Scott Barrish, the political director for the Tampa Bay region, took his Islamophobia a step further and publicly sent a letter to the Council on American-Islamic Relations saying that he knew their plan was to establish a totalitarian theocracy in America. He wrote, “This is us vs. you. In the great words of the late President Ronald Reagan, ‘I win, you lose!'”

The AP found multiple posts that ruminated over violence committed by African Americans against white Americans. Some Trump staffers thought that news of these crimes was being systematically suppressed, as part of some sort of conspiracy theory. Delgado (the defender of the American legal system against sharia law) wrote, “How about this little white boy being murdered by a black man.”

Delgado also shared a fake photograph of Secretary of State John Kerry and Jane Fonda that was forged in an attempt to link Kerry to communism. Her opinion on the pair: “I say hang them!” Barrish (the bold letter writer) also has thoughts on vigilante justice. He tweeted, “if our freedoms must be defended against a tyrannical government so be it.” No one disputes that sentiment, but Barrish likely has a very flexible definition of what counts as “tyranny.”

Nothing of this nature was found in the social media profiles of three dozen Clinton staffers or in the 19,000 DNC emails. Donald Trump’s campaign appeals to fringe right wingers, white supremacists, religious bigots, and conspiracy theorists. Frankly, the posts that the AP uncovered are not surprising, though they are terrifying. They speak volumes about the tone of Trump’s campaign; at the very least, they serve to corroborate criticism that began on day one, when he suggested that Mexican immigrants are rapists.