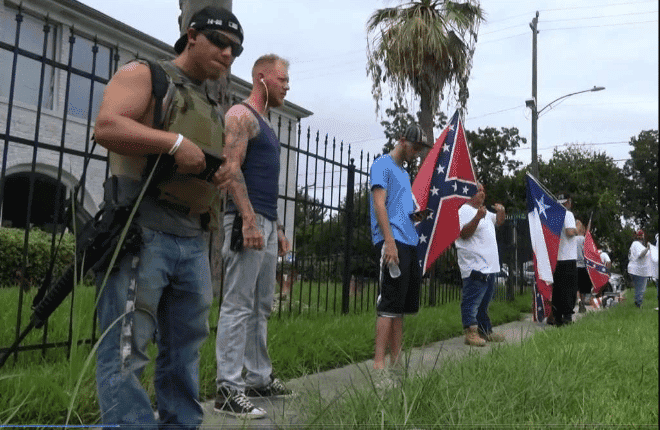 Disgusting racists came out of the woodwork to the Houston headquarters of the National Association for the Advancement of Colored People (NAACP) to allegedly protest Black Lives Matter (BLM) and the NAACP’s response to BLM. If you had to guess, who do you think the protesters will be supporting for president?

Dubbing their group “White Lives Matter” the mass of ignorant individuals invaded the yard of the NAACP waving Confederate Flags while carrying a slew of firearms. According to a White Lives Matter member named Ken Reed, “We came out here to protest against the NAACP and their failure in speaking out against the atrocities that organizations like Black Lives Matter and other pro-black organizations have caused. The attack and killing of white police officers, the burning down of cities and things of that nature. If they’re going to be a civil rights organization and defend their people, they also need to hold their people accountable.”

Reed continued, “We’re not out here to instigate or start any problems.”

Oh really? Going to an organization whose entire existence is to help individuals obtain racial equality while proudly waving a flag which symbolizes slavery is not instigating? These individuals are either liars, or oblivious to the history with which they claim to possess knowledge.

Residents near the NAACP building were equally as dismayed by the message of White Lives Matter. Quintina Richardson, who lives in the area, said, “You’re saying Black Lives Matter is a racist organization but when you’re throwing the Confederate flag up and saying White Lives Matter, are you saying you’re racist?”

While the participants of the protest claim to have come in peace despite menacingly carrying firearms, and claim to not be racist while flying a flag which symbolizes slavery, their motives are plain for those versed in the doublespeak of idiotic racists. These bigoted and hateful individuals are afraid of the world that is to come, because society has outgrown their ignorant philosophies. Never again will individuals stand in the back of a bus due to the color of their skin for fear of retribution from individuals who attend these “protests.” The time of racial injustice in America has come to an end, and these individuals know this. The protest in Houston is merely one of the lasts gasps of air of an ideology that is dying from suffocation — and that moment cannot come soon enough.