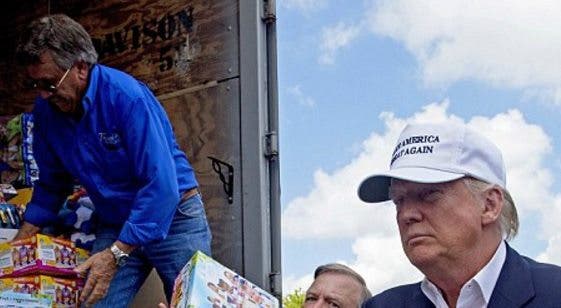 Republican presidential nominee Donald Trump has been working overtime to turn the devastating floods currently engulfing the state of Louisiana into an image rehabilitation opportunity, visiting the state against the wishes of Governor John Bel Edwards for photo-ops of him handing out supplies that he didn’t donate and making a sizable donation to relief funds after the state’s residents loudly called for him to do so.

Except it turns out that Trump did not donate $100,000 to an aid relief organization; instead he gave it to a church headed by Pastor Tony Perkins, the leader of a hate group of virulent anti-choice and anti-gay religious extremists known as the Family Research Council. The group is known for their work fighting abortion and stem cell research, demonizing pornography and homosexuality, and promoting “the Judeo-Christian worldview as the basis for a just, free, and stable society…Under his leadership, the group continues to peddle its false claims about homosexuality and has made combating the ‘homosexual agenda’ a seemingly obsessive interest.”

Pastor Perkins in particular is known for associating homosexuality with pedophilia, saying such things like “while activists like to claim that pedophilia is a completely distinct orientation from homosexuality, evidence shows a disproportionate overlap between the two. … It is a homosexual problem.” He is also famous for saying that natural disasters are punishments sent by God to punish homosexuals, so it’s extremely ironic that he lost his own house in the floods.

The choice of Perkins’ church is not an idle one. Trump did not make a “donation to charity;” he bought influence and favor with an influential religious extremist group that would find much common ground with the Taliban. Given the hypocritically exploitative behavior often exhibited by prominent preachers, it would not be out of the question to ask whether or not those funds are to be used to rebuild Mr. Perkins’ own home. Once again, Trump’s acts of “charity” are revealed to have not an ounce of true generosity behind it, but are merely opportunities for him to advance his own selfish interests.