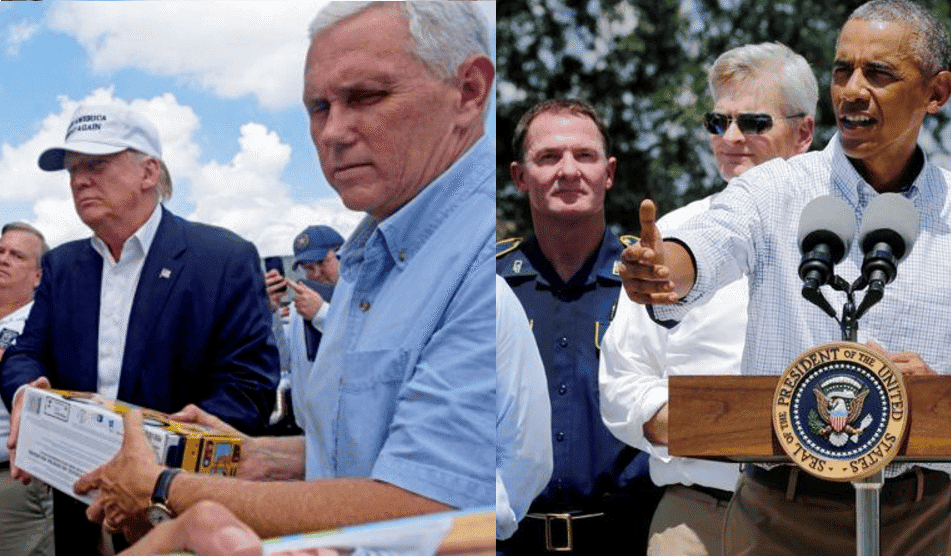 Washington Post Fact-Checked Trump’s Flood “Donations.” The Verdict Is In…

Entire communities in Louisiana have been recently devastated by catastrophic floods, displacing tens of thousands and taking thirteen American lives. As politicians respond to the natural disaster, differences between their approaches have become clear. Democratic nominee Hillary Clinton made a sensible call for donations to the Red Cross, an organization working tirelessly to meet the diverse needs of affected Louisianans. The most striking contrast that has emerged is that between Republican nominee Donald Trump and President Barack Obama.

Louisiana was displeased to receive Trump during the most important early days of rescue and assistance, with Governor John Bel Edwards going as far as to warn Trump to stay away and that he would prefer monetary donations to relief organizations. A disaster area is always better off if politicians stay away to avoid distracting from and interrupting the work of first responders, as a Hurricane Katrina survivor noted in a viral anecdote.

Trump trundled down to St. Amant, LA and had some nice photos taken in one of his “Make America Great Again” baseball caps while he unloaded some supplies from a truck before stopping by the church of notorious anti-gay and anti-choice religious extremist Tony Perkins, who heads the hate group called the Family Research Council.

President Obama, on the other hand, obeyed the wishes of Governor Bel Edwards and stayed away until the situation under control. He traveled to Baton Rouge today and was given a hero’s welcome before he gave a speech highlighting the immediate and long term needs of the flood victims.

Their lives will not return to normal in a few weeks when the public will be tempted to forget about them, as President Obama urges America to understand the extent of the damage and the long term impact it has on families, local businesses, workers, and schools. The President also took some subtle shots at Donald Trump, who only bothered to pose for a few pictures before fleeing to Texas for another one of his racist rallies.

Sometimes once the flood waters pass, people’s attention spans pass. This is not a one off. This is not a photo-op issue. This is how do you make sure that a month from now, three months from now, six months from now, people still are getting the help that they need. I need all Americans to stay focused on this. If you’re watching this today, make sure that you find out how you can help. You can go to volunteers.louisiana.gov, or you can go to fema.gov, or you can go to whitehouse.gov. We’ll tell you. We’ll direct you how you can help.

The American people must not forget the tragedy that is unfolding in Louisiana, for unless we take concrete steps to combat the heating of the globe and the onset of irreversible climate change, President Obama will be forced to make many of these visits in the future.

.@POTUS calls on Americans to stay focused on Louisiana: “This is not a photo op issue” https://t.co/vkmM4UPIiZ https://t.co/esozobMW51

Marisa Manfredo
Marisa completed her undergraduate degree in 2013 at the University of Wisconsin with a double major in creative writing and media studies. She is an advocate of progressive policies and focuses her interests on gender equality and preventing sexual and domestic violence.
Latest Posts
Tags
floods louisiana obama photo op style Trump