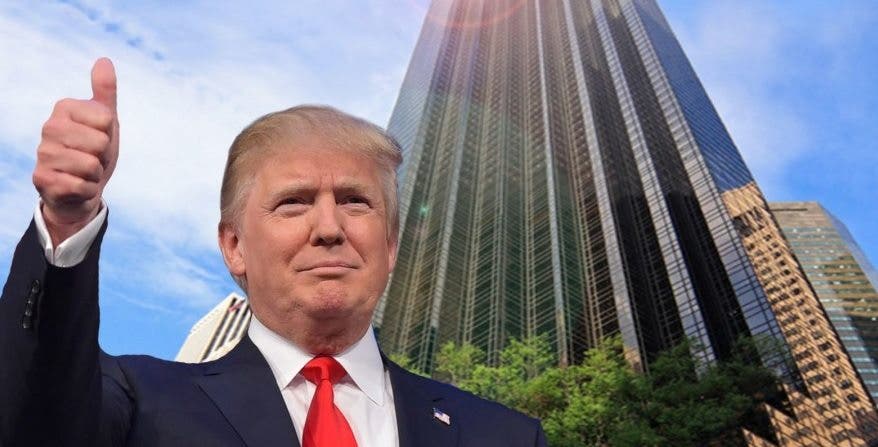 Now that the Republican National Committee is footing the bill for the rent, Donald Trump has jacked up charges to his campaign’s rental of Trump Towers from $35,458 in March to $169,758 this July. Oddly, the Trump Campaign is also housing fewer people in their swank Manahttan digs too, only 172 staffers today versus 197 in March during the primary, according to a recent Huffington Post report.

The Trump campaign paid Trump Tower Commercial LLC $35,458 in March ― the same amount it had been paying since last summer ― and had 197 paid employees and consultants. In July, it paid 172 employees and consultants. eponymous golf courses and restaurants more than $260,000 since his campaign and the RNC struck a joint fundraising deal in mid-May, after he essentially locked up the GOP nomination. On May 18, the day the fundraising deal was announced, Trump International Golf Club in West Palm Beach was paid $29,715; Trump National Golf Club in Jupiter, Florida, was paid $35,845; and Trump Restaurants LLC was paid $125,080, according to FEC records. Such large payments were much rarer when Trump was self-funding.

Donald Trump’s campaign has been renting space at his Trump Tower ever since the Republican presidential nominee descended a golden escalator to spew race hate and religious discrimination. This past May, the Republican campaign declared poverty, throwing itself upon the mercy of the party to start a joint fundraising committee when it was flat broke. But based on recent campaign finance report filings, unabashed self-dealing is rampant on the “Trump Train” – as his supporters often alliteratively call his campaign – which shows frequent big payments by Trump’s campaign in rents for visiting his Florida golf courses.

Ironically, the golf courses themselves have stories to tell about why Trump desperately needs this campaign cash flow.

Trump acquired a golf course in the affluent city of Jupiter, and now he’s accused of stealing membership dues, while denying use of the course by his club members, which has been tied up for years in a federal lawsuit that’s nearing judgement early next month.

At the Trump Doral National resort – where the businessman spent over $200,000,000 allegedly on improvements, he then lost a huge judgement for stiffing the painter. Trump also lost the resort’s signature tournament to Mexico City, proving that he can’t even keep jobs in his own resorts, let alone in America with his insane ranting about protectionism and and lots and lots of big, beautiful, false promises.

Miami judge recently ruled against the ruddy billionaire for attempting to arbitrarily and maliciously raise the rent between 226% to 583% paid by internationally acclaimed spa operator Pritikin in an effort to “bully them off the premises,” forcing them to the courts again, against an intransigent Trump continuously as their legal counsel wrote in their second lawsuit to enforce their lease

If nobody wants Donald Trump to run their golf course, or golf tournament and he can’t pay his employees or get along with his business partners in these golf resorts, where he’s paying himself top dollar courtesy of his Gold Executive Club Members, then why would anyone consider him a viable choice for President of these United States?

This latest analysis of Donald Trump’s campaign spending habits bares little resemblance to an actual political campaign, and reads more like a reality TV show about playing a special “racist/fascist/pathological liars edition” of Monopoly, a game incidentally created with Atlantic City’s streets, which happens to be the New Jersey town where the orange one went bankrupt four times on his monomaniacal failed casino ventures.

The Republican candidate is racking up big bucks as he races around the electoral map, as he collects rent from the piece – in this case the Republican National Committee – who lands on his hotels.

Grant Stern
is the Executive Editor of Occupy Democrats and published author. His new Meet the Candidates 2020 book series is distributed by Simon and Schuster. He's also mortgage broker, community activist and radio personality in Miami, Florida., as well as the producer of the Dworkin Report podcast. Grant is also an occasional contributor to Raw Story, Alternet, and the DC Report, and an unpaid senior advisor to the Democratic Coalition and a Director of Sunshine Agenda Inc. a government transparency nonprofit organization.
Latest Posts
Tags
RNC style Trump Towers