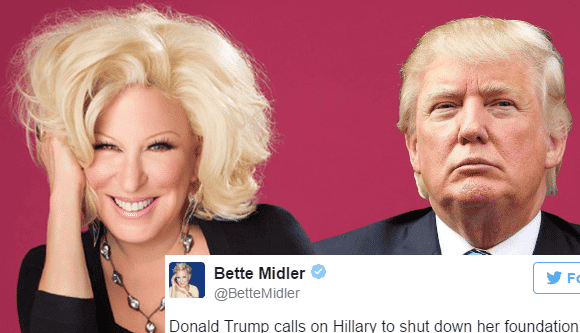 Bette Midler took to Twitter to roast Republican nominee Donald J. Trump for his attacks on the charitable Clinton Foundation. Trump has been echoing allegations that the Clinton Foundation was being improperly used to purchase influence within the Obama Administration while Hillary Clinton was Secretary of State.

The famous singer, songwriter, and actress wasn’t about to let that go. With her trademark wit, she delivered a devastating zinger in a single tweet.

Donald Trump calls on Hillary to shut down her foundation. Meanwhile, we’re all still begging him to choose a more natural color for his.

We couldn’t have said it better ourselves – although we might add that Trump shouldn’t throw stones when his own foundation is under investigation for potentially scamming veterans. Mr. Glass House, indeed.