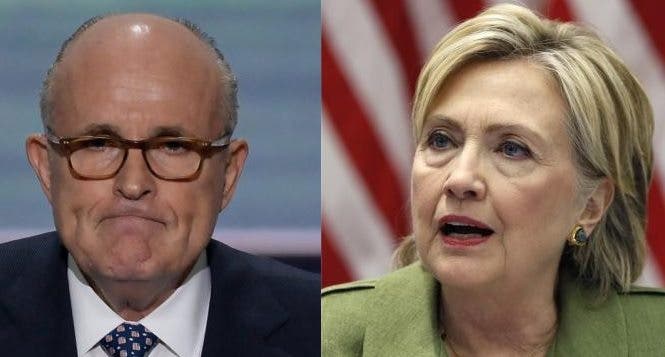 The editorial board of the Washington Post released a hilarious op-ed today, mocking former New York mayor turned professional Islamophobic wingnut Rudy Giuliani for his increasingly bizarre behavior and his clearly deteriorating relationship with reality. Taking him to task for perpetuating the right-wing conspiracy that Democratic nominee Hillary Clinton is somehow physically unfit for the presidency, the WaPo board roasted Giuliani for a number of gaffes:

During his 15-minute speech at the GOP convention last month in Cleveland, it was notable that when he said Donald Trump loves “all people, from the top to the bottom,” Mr. Giuliani animatedly gestured toward his knees as he said “top,” and above his head as he said “bottom.” Also, why did he say that he and his wife, Judith, have been friends with Mr. Trump for 30 years, though he met his wife in 1999, only 17 years ago?

Also — we’re noting this purely out of concern — during his speech he often licked his lips, indicating dry mouth, which, according to the Mayo Clinic, can be a symptom of nerve damage, stroke or Alzheimer’s disease. At the end of his address, beads of sweat were visible on his pate — did that not suggest heart disease?

Mr. Giuliani is just 72, but he seemed slightly stooped as he walked to the lectern, where his wide stance made us wonder if he’s unsteady on his feet. Then there was his slurred diction, as when he referred to “jushtified” police shootings and Syrian “refyoongees.” More evidence of a stroke?

Yes, all of the above is ludicrous — as ludicrous as Mr. Giuliani’s own loathsome smears and innuendo about Hillary Clinton’s health, which follow Mr. Trump’s. In recent days, indulging a grudge he has evidently held for years, he has urged people to watch Internet videos that purport to prove Ms. Clinton is ill. He doubled down after that, saying the Democratic presidential nominee appeared “tired” and “sick.”

Of course, Mr. Giuliani hasn’t a speck of evidence for his blather, a damning fact considering he was once a federal prosecutor, and proof positive of his impaired character, if not health.

Voters have a right to relevant facts about both presidential candidates’ health and are correct to question the degree to which each (or, more accurately, neither) has been sufficiently forthcoming about his and her medical history. In fact, Ms. Clinton has released more (and more relevant) information than Mr. Trump, whose own physician, Harold Bornstein, a gastroenterologist, quackishly asserted that, “If elected, Mr. Trump, I can state unequivocally, will be the healthiest individual ever elected to the presidency.” (One can only imagine the detailed study Dr. Bornstein has devoted to every previous president’s health, including that of Theodore Roosevelt, an accomplished boxer, hunter and outdoorsman who, when he became president, was 28 years younger than Mr. Trump.)

Unfortunately, Mr. Trump, 70, has taken the same nondisclosure stance on his health records as he has on his taxes, asserting there is nothing to hide while hiding everything. Ms. Clinton, by contrast, has released some test results, which, as far as they go, indicate good health.

That hasn’t stopped Mr. Giuliani from trading in scurrilous and debunked theories about the Democratic candidate. Come to think of it, he should see a doctor.

Giuliani recently went online and demanded that voters “go online and put in “Hillary Clinton illness.” Doing so will present an uninformed voter with a number of ridiculous conspiracies regarding former Secretary Clinton’s health, such as the idea that the Secret Service is injecting her with Diazepram to keep her calm, how she has “coughing fits” and – no joke – how she apparently has a mysterious hole in her tongue.

All of this is, of course, ridiculous. Almost as ridiculous as Rudy Giuliani’s assertion that there were “no terror attacks” in the United States before President Obama – even though his entire political career has been based on exploiting the tragic deaths of the 9/11 attacks. Good riddance to you, Mr. Giuliani. Go home, and get some help.

Colin Taylor
Opinion columnist and former editor-in-chief of Occupy Democrats. He graduated from Bennington College with a Bachelor's degree in history and political science. He now focuses on advancing the cause of social justice and equality in America.
Latest Posts
Tags
hillary clinton Rudy Giuliani style