The Donald Trump campaign has been stepping up its laughable efforts at “minority” outreach in the past week or so, suddenly attempting to present a pandering message of hope to minority communities.“We will reject the failures of the past and create a new American future, where every child—African-American, Hispanic, all children—can live out their dreams together in peace and in safety. I will be the greatest jobs president that God ever created!” declared Trump in Florida on Wednesday.

The absurdity of the new efforts is that his entire campaign up to this point has entirely avoided engaging with minorities, and both his camp and his supporters often go out of their way to demonize and exclude them. His opening speech labelled Mexican immigrants as “rapists and criminals.” Trump commonly utters phrases like “my African-American over there,” casually reducing a human being to an inanimate prop to be waved about for the media. In his recent speeches, Trump describes minority neighborhoods as dangerous hellholes and “war zones,” where moochers fight over welfare and that if you vote for Trump, “you won’t get shot” because Trump will instantaneously cure the socioeconomic inequality, the cycle of poverty, and the institutionalized racism that whites have forced on American blacks ever since Emancipation.

This cartoon from The Week illustrates perfectly why Trump’s “outreach” is doomed to fail: 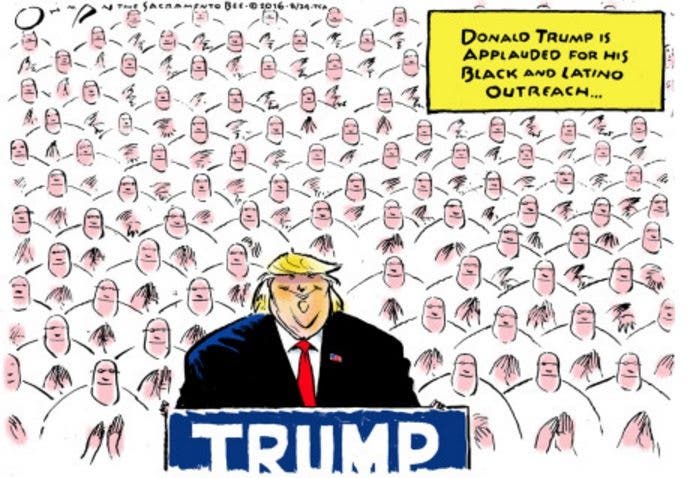 “I hear him not talking to black people, but talking to white people about black people so they will think he cares about black people. The real thing that he’s trying to do is to try to protect some of the white vote by suggesting to them that he cares” notes Alexis Scott, a former publisher of The Atlanta Daily World. Former Jeb Bush strategist David Kochel agrees, telling Bloomberg that “white suburban voters think he’s a racist or running a racist campaign. This is designed to make them feel like he is doing minority outreach even though the messaging is completely off-target.”

Minority communities in America are not going to fall for his abrupt pivot, especially one so obviously insincere. That might be why Trump is still collecting a mere 8% of the black vote a few months away from the election. One might hope the sudden outreach to minority voters would alienate his rabid alt-right voter base, but since they’ve been entirely unmoved by Trump’s ideological inconsistency up to this point, it’s doubtful as to whether anything at all could shake their support. But that’s all he has – disgruntled white working class Americans, and they will lose at the polls thanks to the very thing the alt-right is fighting against – a unified and diverse America made up of people of every color and every religion and originating in every other nation.

Colin Taylor
Opinion columnist and former editor-in-chief of Occupy Democrats. He graduated from Bennington College with a Bachelor's degree in history and political science. He now focuses on advancing the cause of social justice and equality in America.
Latest Posts
Tags
cartoon style Trump