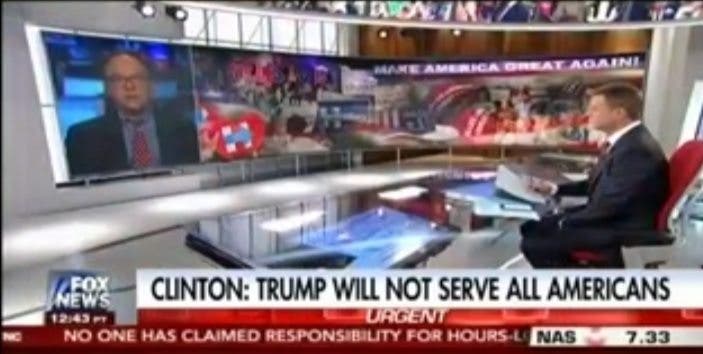 In this astonishing clip, FOX News anchor Shepard Smith conceded that Democratic nominee Hillary Clinton’s condemnation of Republican nominee Donald Trump and his connection to the “alt-right” was accurate and deserved.

With a candor remarkable for the right-wing propaganda network, Smith admits that “”The Democratic candidate for the presidency has just tagged her Republican rival as a racist, fear-mongering conspiracy theorist who is temperamentally unfit to be President of the United States. The problem with any attempt to rebut her is that in this case she used Donald Trump’s own words, was historically accurate on his policies, on all reviewed points.” Trump has attempted to dodge criticism by simply claiming the opposite, or saying that his remarks were taken out of context, or by outright lying to the media, which has given him the benefit of the doubt for far too long.

Wall Street Journal reporter James Grimaldi said that it was “extraordinary” and that Trump “trades in hyperbole” while Smith counters with “he trades in racism, doesn’t he?”

Grimaldi refused to label Trump a racist and dodged the question, but any cursory examination of Trump’s platform, supporters, or entourage reveals a strain of virulent racism that animates his campaign, giving him purpose and legitimacy among the disgruntled white folks of America. It’s for that reason, however, that Trump will never come anywhere near the White House, as his platform is a rejection of everything our nation stands for.