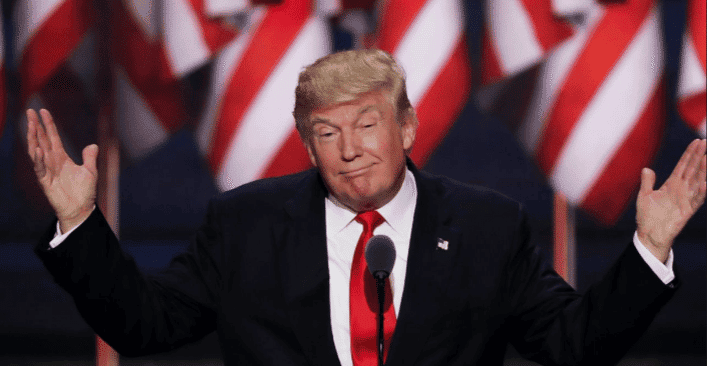 Individuals interested in debating if Donald Trump is truly a racist or whether he’s actually a bigot are likely the same people who are interested in debating if the world is truly flat. If one is not yet convinced by the dozens of racially insensitive statements Trump has made over the last several decades, their lack of decisiveness says more about the individual, and their own inherent racism, than the proven factual record available to the public.

In moments of passion all individuals may say turn the incorrect phrase, which is still deplorable, but forgivable if the individual is shameful and remorseful from their behavior. In Trump’s case he maintains all of his statements are accurate, and the history of Trump’s racism stretches back over 40 years.

To fully understand Trump’s racism one must first consider all of the pieces of his despicable puzzle, and to do this one must start at the beginning.

1973: Donald Trump’s “Trump Management Corporation” was sued by the US Department of Justice because there was evidence Trump actively refused to rent to black individuals. The DoJ further alleged Trump lied to black applicants about which properties were available. Trump responded by saying the government was attempting to force him to “rent to people on welfare.” Trump, even 40 years ago, offered no evidence of this. Then in 1975 Trump quietly signed an agreement with the government to not discriminate against black renters, but in return for signing the agreement Trump did not have to admit he had ever previously discriminated in the past.

1988: Lehigh University invited Trump to speak, and during his commencement speech he said Japan and China were “stripping the United States of economic dignity.” Does his rhetoric sound familiar?

1989: Trump literally participated in a public conviction of innocent black teenagers who were accused of raping a jogger in New York City. The case is often referred to as the “Central Park Five.” After the news broke of the teenagers’ potential involvement, Trump took out full-page advertisements calling for the teens to be executed. The teens were convicted, but their convictions were vacated. Trump maintains his actions were correct and the time and said even if the teens didn’t rape the jogger they were still guilty of doing something at some time.

1991: The former president of Trump Plaza Hotel and Casino, John O’Donnel, published a quote by Trump in which Trump criticized a black accountant. According to O’Donnel Trump said, “Black guys counting my money! I hate it. The only kind of people I want counting my money are short guys that wear yarmulkes every day. I think that the guy is lazy. And it’s probably not his fault, because laziness is a trait in blacks. It really is, I believe that. It’s not anything they can control.” Trump first denied the accusations, but six years later in 1997 conceded that what O’Donnel wrote “is probably true.”

2000: In a bid to hinder an Indian casino from taking business away from his Atlantic City operations Trump secretly paid for a series of ads against the St. Regis Mohawk tribe where he said the tribe had a “record of criminal activity that is well documented.” Did Trump offer any of this well-documented activity to prove his accusations? Of course not.

2004: During season two of The Apprentice, Trump criticized a black contestant for having too much education. He said, “You’re an unbelievably talented guy in terms of education, and you haven’t done anything. At some point you have to say, ‘That’s enough.’” Trump never made this type of criticism towards a white contestant.

2005: With the ratings of The Apprentice falling, Trump pitched the idea of a white people vs. black people version of the program. Trump stated he thought it would be potentially controversial. Really?

2010: Remember the “Ground Zero Mosque” which cause conservatives to lose their minds at the possibility of a Muslim community center being within a few blocks of the 9-11 attack site? Trump publicly opposed the center and attempted to strong-arm one of the investors in the project to halt its construction. Trump said he did this because he thought it was “insensitive” to build the community center.

2011: The “birther” movement against President Barack Obama was in full swing, and Trump was leading the charge by sending “investigators” to Obama’s birthplace to look for impropriety. Trump’s efforts were fruitless and he was later humiliated by Obama numerous times over his participation in the witch-hunt.

2015: Trump calls for a ban on all Muslims entering the United States. When asked if Muslims hate the USA, he replies “Yes, a lot of them. I mean a lot of them.”

2016: Trump insinuates the Judge Curiel is too biased to fairly judge the Trump university lawsuit because he’s of Mexican descent.

2016: Trump declares himself the “law and order” candidate and declares unequivocal support for the police against BlackLivesMatter, accuses BLM of killing police officers.

2016: Trump verbally insults the family of slain war hero Capt. Humayun Khan, insinuates that his mourning mother didn’t speak at the DNC because her husband wouldn’t let her.

Most of these incidents happened long before Trump decided to make a run for the presidency. Individuals who believe Trump has merely been bombastic in an attempt to curb television news to give him free air-time are deluding themselves. The history of Trump’s racism is well documented, and if individuals choose to turn a blind eye to facts that may well explain why they are supporting Trump with which to begin.