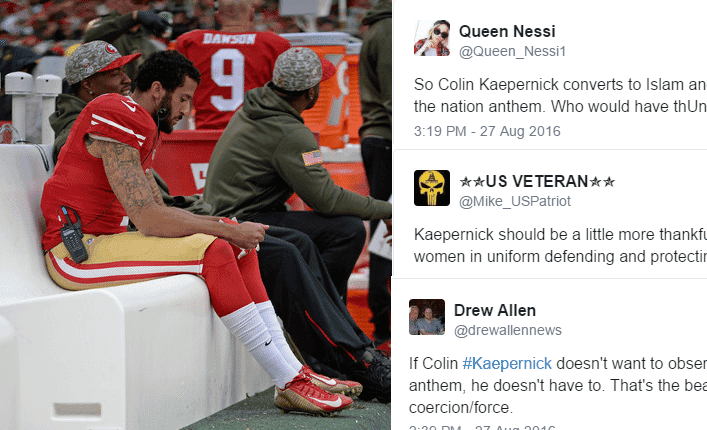 Embattled NFL quarterback of the San Francisco 49ers, Colin Kaepernick stirred up a firestorm of controversy last night when he refused to stand up for the national anthem in protest of violence against nonwhites in the United States. “I am not going to stand up to show pride in a flag for a country that oppresses black people and people of color. To me, this is bigger than football and it would be selfish on my part to look the other way. There are bodies in the street and people getting paid leave and getting away with murder” said Kaep to NFL Media.

Many people showed their support for Kaepernick for speaking out and using the spotlight shone on athletes to raise awareness on the epidemic of police violence against black Americans and the undercurrents of racism which are animating the Donald Trump campaign for the presidency.

Two months ago: “We all should admire Muhammad Ali’s courageous stand for his beliefs.”

If you’re a white person angry at Colin Kaepernick but not at police executing black Americans, you are most definitely part of the problem.

A person who takes a stand is doing more for America than somebody who blindly follows and ignores our problems. https://t.co/5QWRRmjuu6

Good for Kaepernick, especially considering how much money the NFL makes off black guys. https://t.co/KAM3m6uv9d

If Colin #Kaepernick doesn’t want to observe the national anthem, he doesn’t have to. That’s the beauty of liberty: no coercion/force.

If you think Colin Kaepernick sitting for the anthem is about sports, you’re part of the reason why he needed to do that. It’s about lives.

Of course, the very people who complain about the culture of “political correctness” ruining this fine nation instantly threw a tantrum because the mere act of person of color acknowledging that America isn’t a perfect union and that minorities are actively oppressed by the white majority in the United States means that person of color is immediately branded an ungrateful traitor who doesn’t deserve to be in the United States and clearly doesn’t deserve the money he’s being paid to play a game that is so popular it muscled Sunday away from Jesus.

I wonder why Colin Kaepernick would protest the National Anthem & proclaim America to be White Supremacist nation? pic.twitter.com/YNXIZ1VHT0

Kaepernick should be a little more thankful for the men and women in uniform defending and protecting his life.

Fuck Colin #Kaepernick and fuck the 49ers. Asshole, if it’s so oppressive leave your contract and millions of dollars and get the fuck out.

Colin Kaepernick I hope you have a terrible rest of your career. Don’t hate on America… You pathetic waste of space.

I will not be tuning (or support in any way) in to watch a single #49ers game for as long as #Colin_Kaepernick is on that roster.

Would the @nfl response if a white athlete made a pro KKK political statement be the same as for Colin Kaepernick. #Hypocrites

So Colin Kaepernick converts to Islam and now won’t stand 4 the nation anthem. Who would have thUnk it smh #MAGA

#Colin_Kaepernick thinks whites oppress minority when it takes 3 years for US Natives like me to be employed.